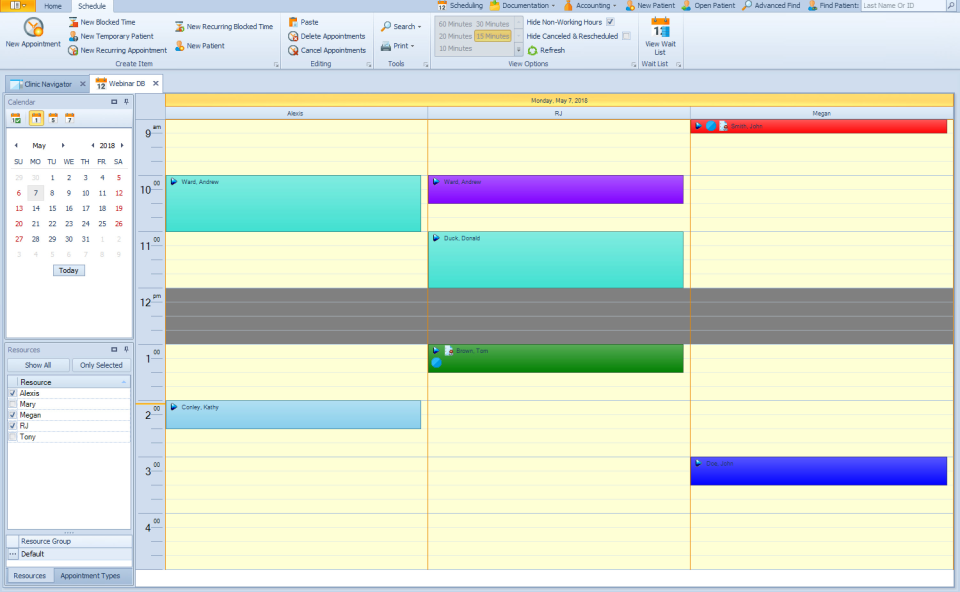 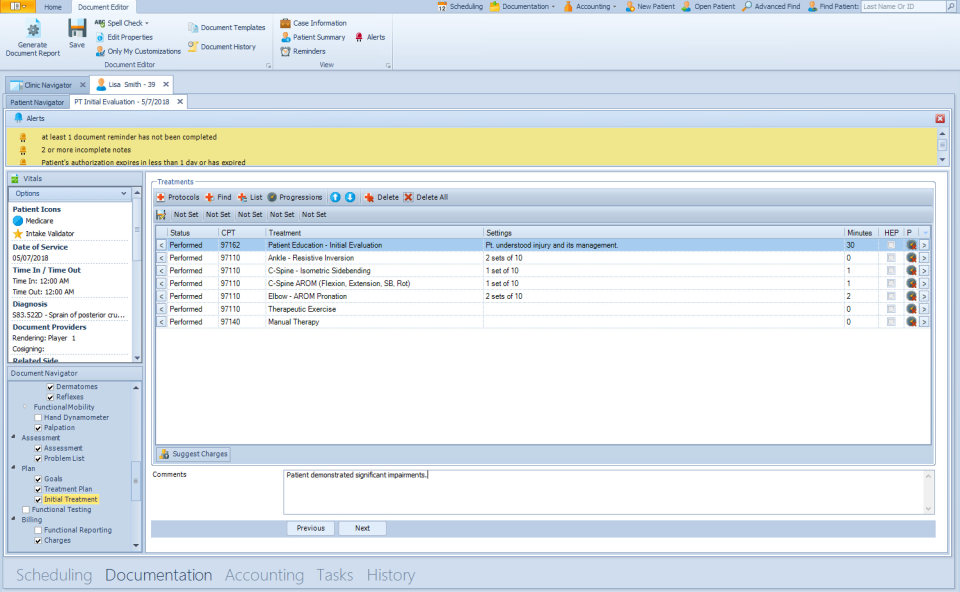 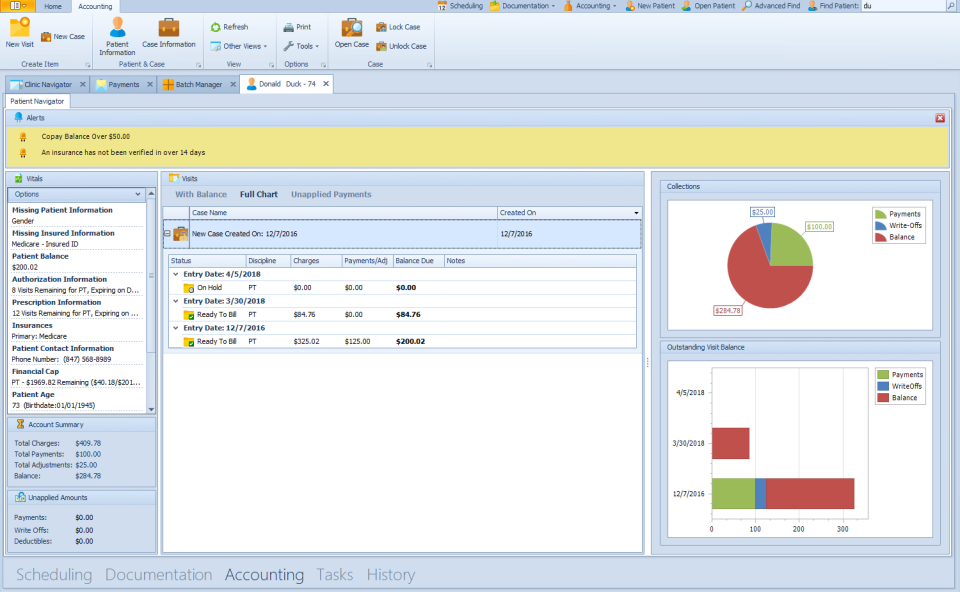 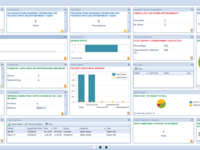 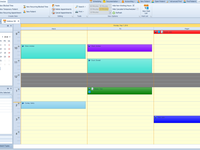 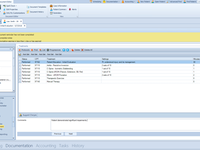 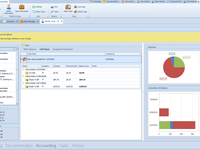 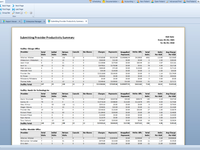 "TheraOffice team is dedicated to helping you maintain your brand while providing a superior product."

Kommentare: I no longer have stacks of paper work to do. I no longer lose sleep wondering if I have met all documentation regulations. My time is more efficient because I save and lock each visit prior to treating the next patient.

Vorteile: The software system has a vast amount of flexibility within its design to allow each clinician and organization to customize various reports and user functions. The TheraOffice Team is very responsive whenever questions arise. I had one payer that required a specific change in documentation. The TheraOffice team problem-solved the need and immediately created a custom report that could be used for that particular payer. The team's quick response had me submitting the claim to that payer with the new documentation format at the end of the business day. I have not locked a single document without charges included. The system has built in protection to ensure that all plans of care are signed and that no unauthorized patient visits occur. The built in business reports are very helpful for knowing the health of the business. I love that it really, really integrates with FOTO. That has saved me time because I can easily see the FOTO information right within TheraOffice in a patient's case. I also really like the fax feature. This feature not only saves time, but is also logged in the system creating proof that documents were sent and received. The ability to create tasks with those on the team has improved efficiency by eliminating a lot of non-productive communication time.

Nachteile: I'm still having difficulty with the accounting system. At the moment, the accounting module isn't quite as intuitive as all the other modules.

"Tech support is always quick to respond to our needs! "

Vorteile: The best part of Theraoffice is fact that you are able to customize the schedule and documentation. In general, it is easy to use compared to other programs we have used in the past.

Nachteile: 1.Having the different modules for Documentation and Scheduling.
2. Not being able to minimize windows within the module, you have to click out of everything before proceeding.
3. Not being able to move image notes from one pts chart to another pts chart.
4. Not having a search option in the chart. We use a dummy pt for our referral log and it has hundreds of records, it would be nice to be able to search within the chart
5. With the new up date the faxes are getting back dated when moved them to a chart, we have to manually go in to change the date
6. The amount of times that you have to click through pop up boxes to get where you need to be (printing, searching for pts, moving through documentation) (keyboard short cuts would be nice)
7. It would be nice to have the most recent plan of care show in vitals.
8. That once a pt has been discharged it doesn't ask if you wish to delete future appointments.
9. There should be a contact list to fax from so you can fax multiple people: insurance, case mgr, PCP, Referrring DR, sometimes there are 2 referring and a PCP.
10 To Generate an HEP you shouldn't have to have a DX or charges entered.

Vorteile: TheraOffice is a good all-in-one EMR, where we can schedule, document, and bill from one module. After demoing many EMRs, I realized this is actually a rare combination. The documentation allows for common phrases to be put into a drop down menu, so you can point-and-click. BCBS pulled our notes to review and said they were some of the best documented they'd seen.

Nachteile: There are a LOT of quirks. Once you figure them out, they become second nature, and aren't generally an issue, but you do have to understand that it may be frustrating to use at first. For instance, TheraOffice allows for charge checks, but it doesn't check them automatically, so you have to be sure to click the button on every claim. Also, TheraOffice recently went to one module and I can't say I'm a huge fan. If I'm entering an ERA that's $8,000 and the phone rings and it's a patient asking when their next appointment is, I have to close out of the ERA and start it again later, there's no "save" or way to push it to the background.

"They Tech support has been wonderful! Always fix whatever problems I have!"

Vorteile: It is pretty easy to use. We didn't have much training at all so glad it is user friendly. I like that the balance shows up on navigator. I like the temporary patient to start a new patient on the schedule.
I also like that you can post patient copay from the scheduler.

Nachteile: The original person we had that signed us up wasn't exactly honest. She told us about different functions that Theraoffice can do without telling me there were hidden charges. this did upset me however we had already signed a contract. to be honest had I known some of the features that are additional charges I would have gone in a different direction then Theraoffice. I like it but, there are some things I don't like. Statements are not that easy to print. Looking at the patient account isn't that easy you have to go into to many different screens. I don't like the fact the you get signed out if not using for a bit. I know it is a safety issue it is not convenient for me at all. There are a few other things that I am not happy with also . Over all I like the software.

"TheraOffice is the solid foundation of our practice."

Kommentare: Keeps my accounts receivable manageable. The documentation is a breeze especially when using customized templates. I have actually learned some things about therapy practices that I was not aware of in the past. Most importantly it out performs the other three programs that we have used in the past.

Vorteile: Listen to suggestions with new implementations every quarter. Customer support is always friendly, knowledgeable and efficient. The most positive customer oriented business I have ever known.

Nachteile: The user manual needs to be more up to date and actually include all aspects of the software and its use.