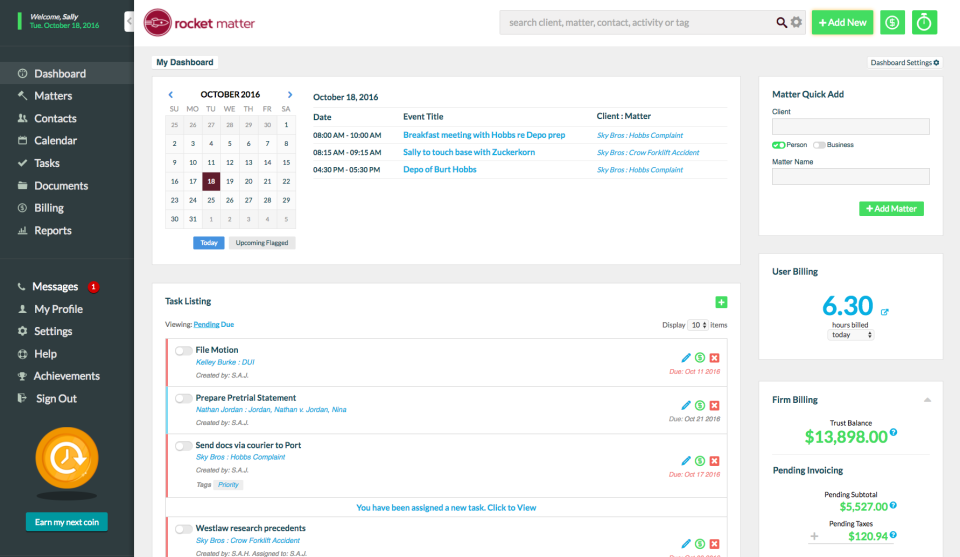 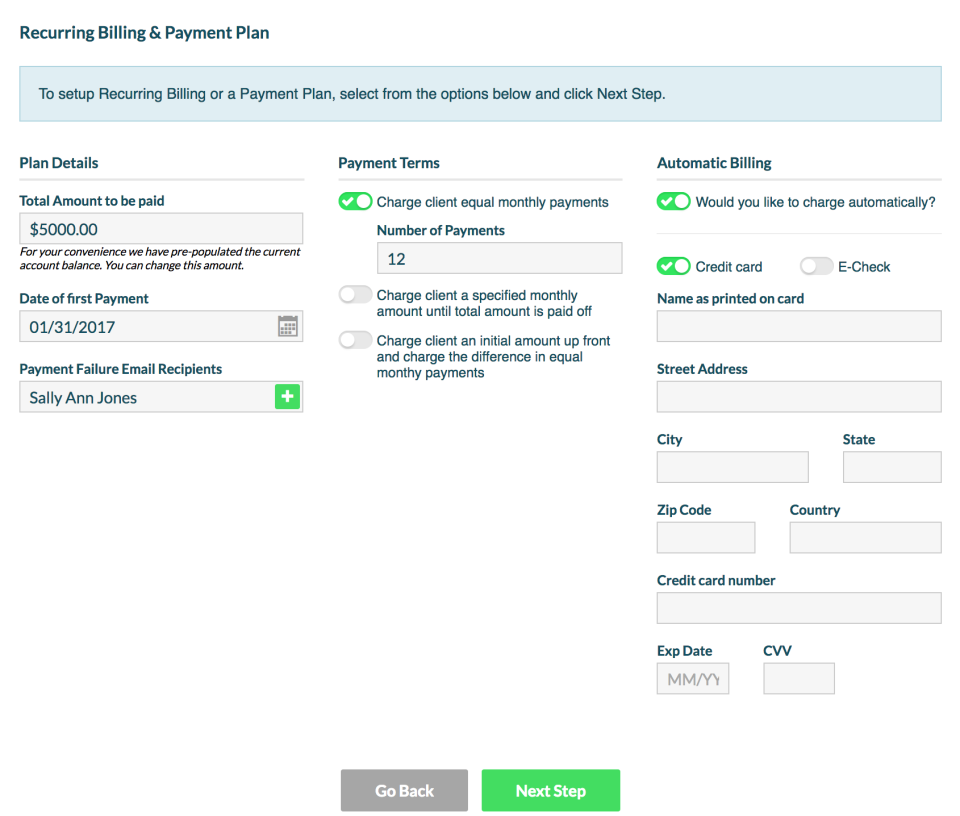 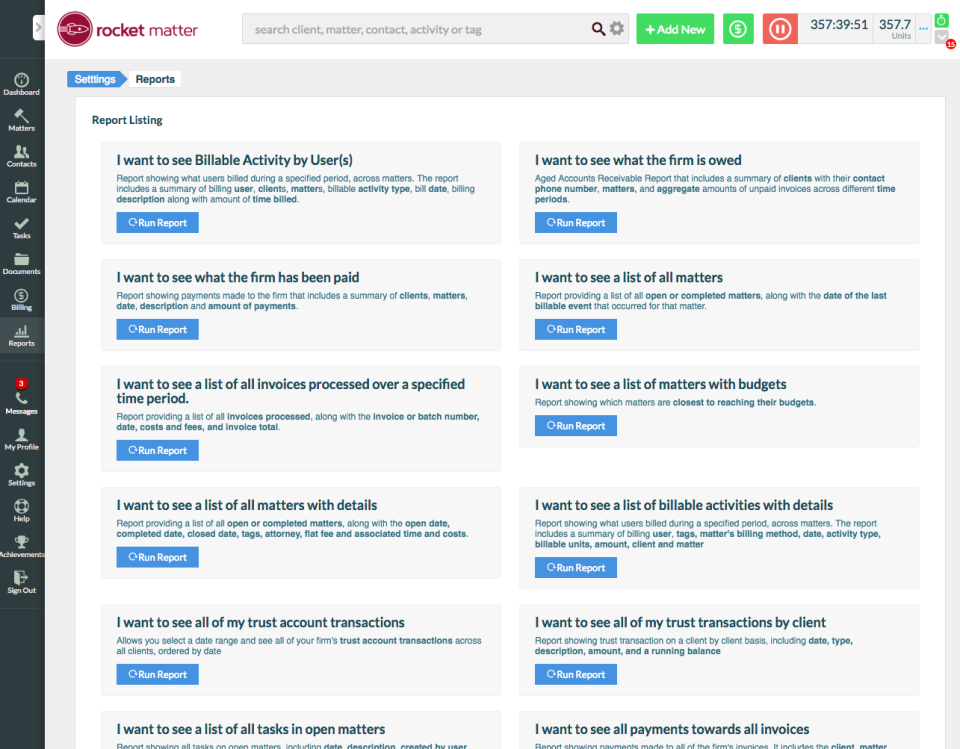 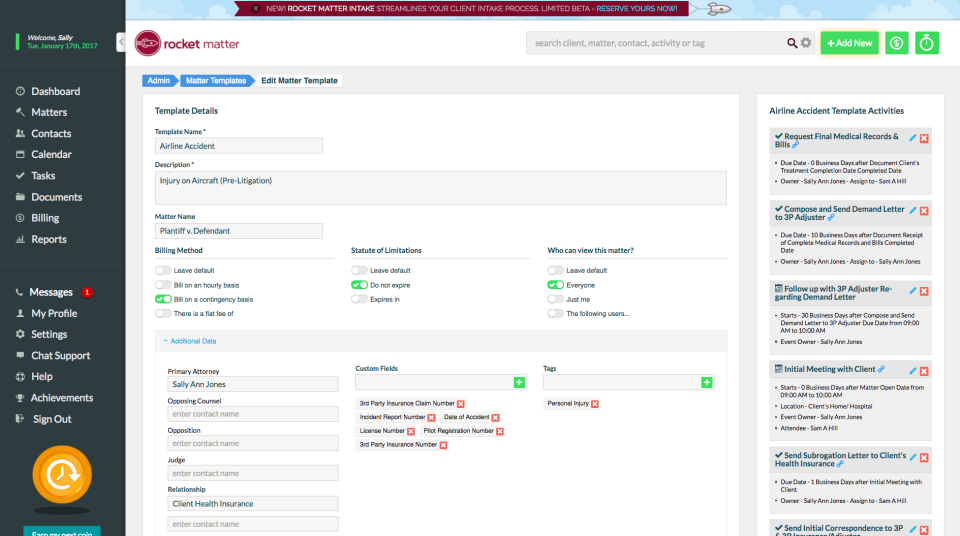 (5)
Timeghost is your time tracking tool that is specifically designed for Office 365. You can track all your projects and tasks with it.
Produktdetails Vergleich anzeigen

(12)
A powerful single solution designed to enhance the performance of your law firm. Let LawMaster improve your firm's performance by 30%!
Produktdetails Vergleich anzeigen

GREAT software to keep track of your cases and bill hours. A bit expensive.

Kommentare: BILLABLE HOURS! Keep track of them. TEMPLATES! Based on the kind of law you practice. CONTACTS! Let's say you have an adjuster saved as a contact, he calls to settle a case, then you're able to see all cases with him and discuss all.

When set up properly you can just open new case and auto assign tasks to your staff by templates. We are an Injury Law and this software has made our practice a heck of a lot easier.

PRICE. Every user is billed separately. Would be nice to have have packages based on the size of the law firm.

Easy to use and full of features

Ease of use and setup. Customer service has been great and responsive. Also the cost for what it does is reasonable.

Kommentare: Their support desk employees are responsive when you call them for support, but their development side is sorely lacking. Overall, how good is it? My old firm developed our own in-house software in the late 1990s that still out performs Rocketmatter.

RocketMatter was a good value for the money when it first came out. It has fallen well behind other software now.

When we signed up for RocketMatter is was being praised as a modern platform. Unfortunately it is not modern. It is now like driving an old used car held together with duct tape. RocketMatter is not updating the platform at all. It seems like all they do is release APIs to allow other programs to link to it. Many of those links are clunky, ill conceived and generally a nuisance. I defy anyone to use, for example, the Fujitsu ScanSnap integration, or their mobile apps. Both are so ill conceived and executed that they are essentially worthless. If you ask questions about improvements, RocketMatter refers you to another site called Receptive where they ask you to identify potential improvements. They don't appear to be updating it, as they have "planned upgrades" listed as upcoming in the future (more API connections) that they released a year or more ago. They also don't appear to be reviewing suggestions on the site, as noted by people posting there.

James, Thank you for taking the time to leave us a review. We are sorry to hear that you have experienced some frustration with Rocket Matter. We have recently updated our mobile application and are hard at work to ensure that other customer-requested improvements and features are added to our software on a monthly basis. We would really love the opportunity to speak to you regarding your personal experience with Rocket Matter so that we can make it right. Please be on the lookout for an email from our support team so we may discuss how we can help work toward a solution. Thanks!

Kommentare: It has been very good which is why we have stuck with them for 7 years now. It is especially highlighted for me now that we also have a CRM software. We have had 2 different CRMs and neither one of them had the easy standard reporting features of Rocket Matter. I would consider using RM if they had a CRM.

I love the reporting features that are built in. It makes it easy for me to find data about the operation of the business. It is very easy to run invoices and track time.

It is difficult to pull reports that are not standard part of RM package. The RM team has helped us device a way to do so but it is still clunky. It also took approx 20 hours of my staff time working with RM team to make it possible to add interest to client invoices. It something that should be standard in any case management software that does billing.

Kommentare: I am very pleased with the service.

That is is a cloud based program with updates and customer service included in the subscription.

I would like a billing option to have the timer, with a short description of the action (that is always generated on the invoicing), but another section for notes (because I will sometime take notes on the timer description) that do not generate on the invoicing. Because, sometimes I will have to go back through the invoice and delete verbiage. Also, the phone/iPad app does not work very well...I find.