Get answers fast with Nextiva Surveys, our custom online survey software. Collect the answers you need to understand your audience and make better decisions. Featuring nine question types, survey templates, email notifications, skip logic, and more, Nextiva Surveys provides all the tools needed to measure respondents. Plus, businesses can customize landing pages, thank you pages, colors, and everything in between! Seamlessly integrate with other Nextiva products for a full view of audiences. 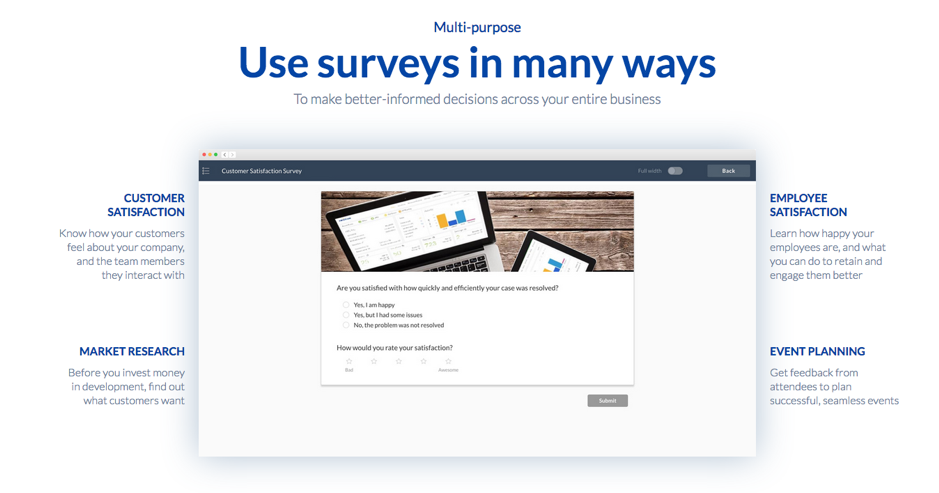 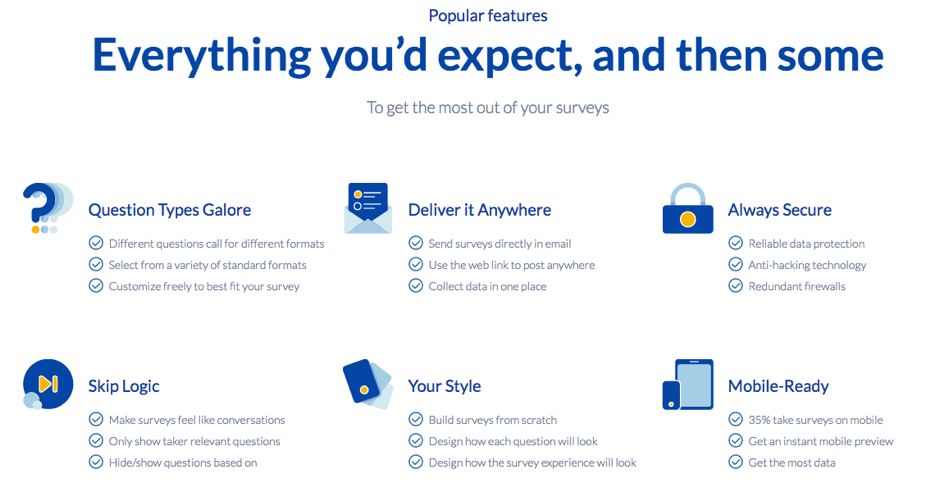 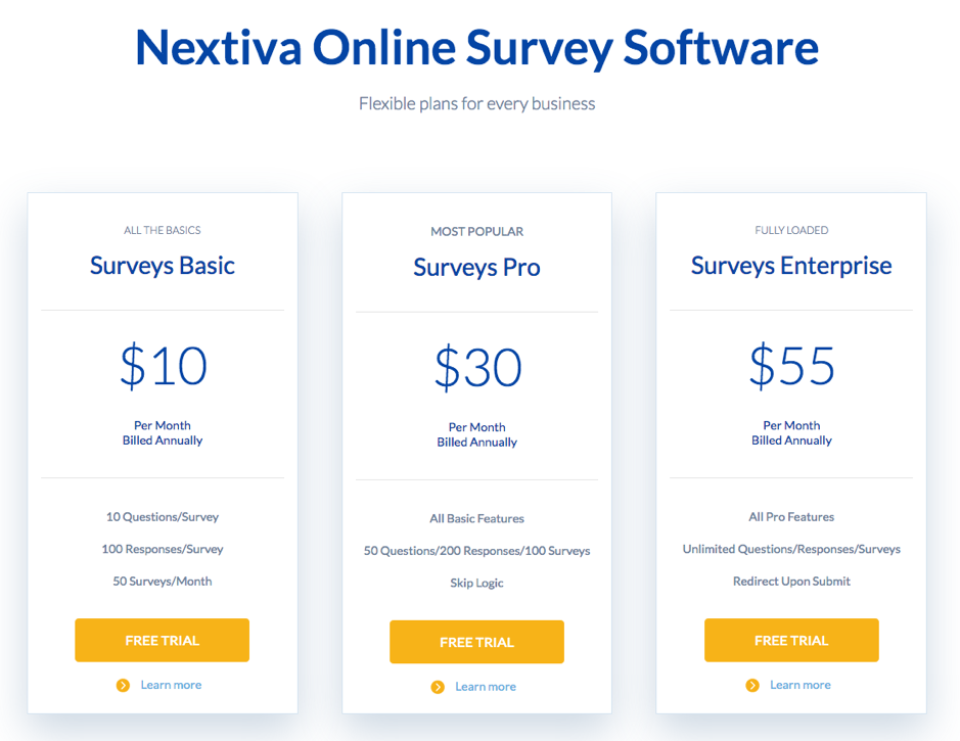 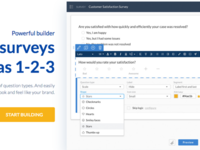 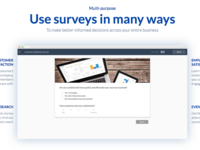 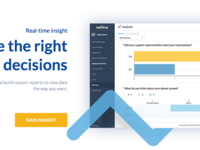 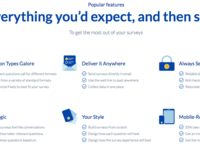 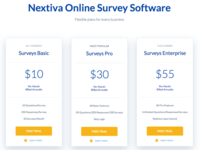 Nextiva delivered for our business

Vorteile: 1. What a difference a new system can make on your business. Now, phone calls are going to the right individual in their department. Before using a VoIP service, our whole system was a mess. We had no department structure regarding calls, and they were being answered by the closest person to the main phone in their department. The quality of the service is great, too. Every call has been crystal clear, and no dropped calls.
2.) Easy to use for our company. We have several employees that range from their mid-20s to 50s. After a week of using the NextOs; they all understand how to use the phone, and the app. The app has added a new communication layer for our business. It's gave all our employees the ability to chat with each other on the app and eliminated the need to text on a personal cell phone.
3.) So far if we have any questions, we have a support representative that we can email or call with any questions. The whole concept of a VoIP phone system can be intimating, but the on-boarding process made it a lot smoother and easy for our IT department.
4.) A neat feature that we just started to use is Nextiva Analytics. It provides you with all the data that you need to analyze your calls. You can see the various data regarding your calls and do business adjustments. It’s like a top overview of your call data.
5.) From our first sale’s call to when we call now, everyone has been professional and polite at Nextiva. We are comfortable with their service, and their team. We

Nachteile: What we liked least about using Nextiva is the onboarding process took a bit longer than we expected. We had a delay porting our numbers to Nextiva. Beside this small headache, we have had smooth sailing.

Kommentare: Overall I think we can say we are big advocates for the Nextiva software. It’s been important to our growth over the last 3 years and they are always developing new products that adequately address problems in many businesses. I appreciate both the quality of their work as well as how they work with their clients. It’s a partnership and they are very good at clear communication, clear expectations and fulfilling their side of the agreement. When issues arise, as they can, these are handled quickly and without any major impact to the business. They understand our business and our needs and are working alongside us to improve at all times. It’s a great culture, they have great people and the culmination of this has had a positive result for us.

Vorteile: We work with Nextiva for a number of their products. We first made the move to their VoIP service and had such a great experience we have since started using many of their other products, including email marketing, cloud storage and a few others. The Nextiva set up works very well for us as we’re able to get a service level that we didn’t think was possible for a business of our size. It’s important to us as we still need a customized set up but don’t have the budget for a huge implementation. Nextiva’s platform enables us to add on as we need and it has integrated really well with our existing systems and processes. From a training and onboarding standpoint, our team has been able to get up to speed quickly and that means we can realize the benefits of the technology investments fast. Our sales team is especially happy with the mobile app and the ability to work remotely with ease. It’s really made a difference to them and their performance. We are very happy with the overall offering and pricing of Nextiva’s products and they are a preferred partner because of it.

Nachteile: There was only one time that we had issues with Nextiva and that was due to a staffing issue they had on their side. It was an isolated issue with a new employee who was removed very quickly. We do not believe that this situation was reflective of the company and they were able to remedy very quickly.

Great phone option for the tech-savvy and/or mobile business

Kommentare: The onboarding process went pretty smoothly. We started with a tech setup phone call, which took a bit over an hour. Customer service since then has been a little spotty - but we haven't been put in a pinch yet.

Vorteile: I like that Nextiva can go with you anywhere you want to go - whether you choose to use your cell phone or a desktop phone. You won't have to change ISP's if you move to a new location - just plug into your internet connect or use your cell phone and you're good to go.

Nachteile: Setting up voicemail, call groups, and other features is a bit frustrating. There is definitely a learning curve to setting up this system, so give yourself some room to learn their admin panel and features.

Nextiva the Good the Bad and the Fugy

Kommentare: The best things about working with Nextiva are
1. Our Sales Rep .
2. Amazing! HD Call quality compared to our old VoIP Service.
3. Versatility of the software. Our Sales Rep worked his ass off for us. And had the patience of a saint with my million and one questions, and reworking the quotes to our needs over & over & over....
Over a years’ worth of questions and reworking the quote to something we could get the big boss to sign.
Let’s be realistic any time you are making this big of a change to your corporations 30+ phone network in multiple states. it will never go 100% perfectly without a hitch as much as you prepare and strive to make every preparation.
Two months before our ISP was to be installed was when we had our first glitch at the beginning of the setup process while I was on vacation with the family, and only had access to my Cell phone.
And I got the much-dreaded email from the Boss saying no-one can call in on our Toll-free phone number. We’re losing sales! What’s going on? This could be a career-ending type of event. Our toll-free number just stopped working 2 months before the date we requested the porting to take place. I Called the sales rep. He assured me it wasn’t anything that Nextiva did.
About 15 minutes later the sales rep called me back. O’ My god it was us!
He figured out what happened and mad things happen on his end to get our phones back up temporari
He Saved my Bacon!

Vorteile: Ease of use to add and manage users in multiple cities and states remotely.
Ease of adding new phones or devises Like VoIP PA Speaker in the Factory. And cordless phones as a secondary phone sharing a single Ext # with a desk phone.
The old Cell Phone App. (not the new one) everyone loved this App.

Nachteile: 1. Build Call Flow is a total Fake selling tool used to show potential customers how easy it is to configure your call flows. It’s total BS. If you call customer support to assist you in a new configuration they tell you. O that doesn’t really work anymore, we need to configure it on the back end for you. Don’t try to use it.
If it’s nonfunctional don’t try to sell me on how easy it is using it.

Do Not Do Business With This Terrible Company

Vorteile: Nothing. This product was absolutely horrible - but the customer service was even worse. Customer Service and Tech Support know very little about what they are selling. See full review below.

Nachteile: customer service, technical support, customer relations. All of their team does not work together and none of them know what they're talking about. Their service states that it will work with ANY DEVICE, and it is NOT TRUE.