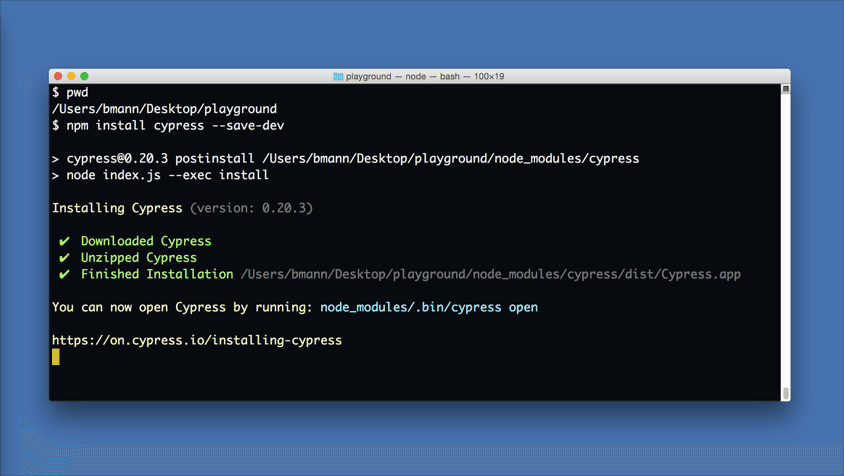 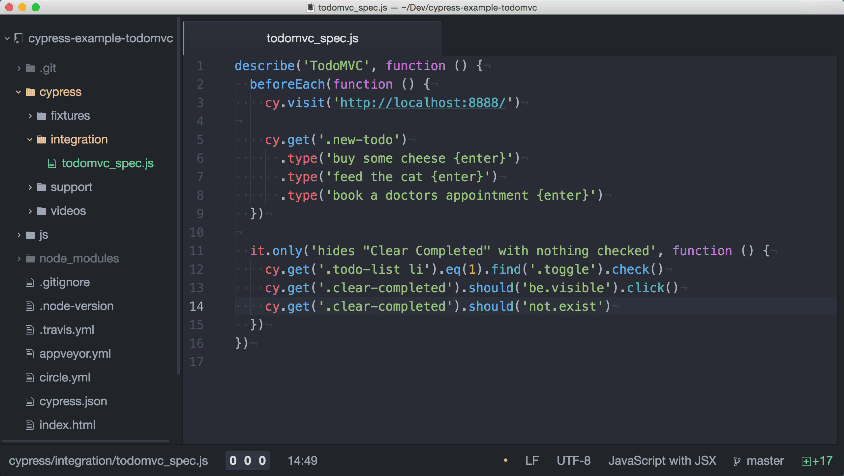 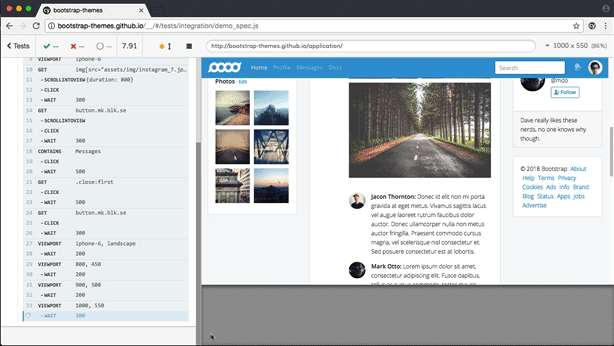 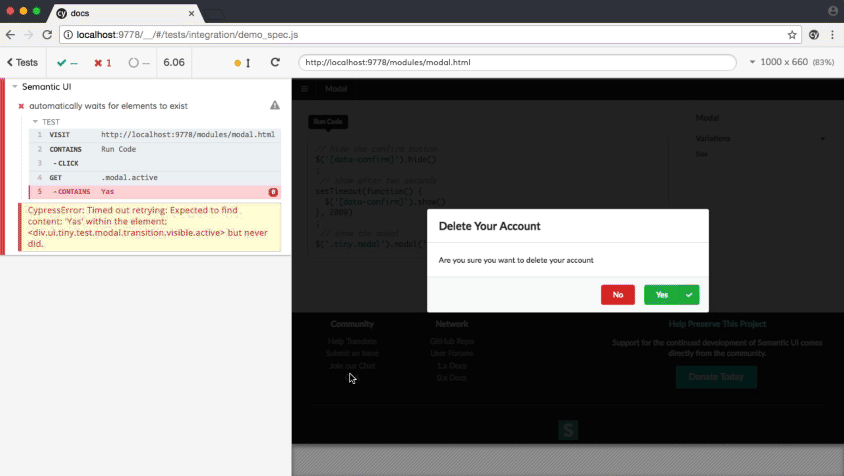 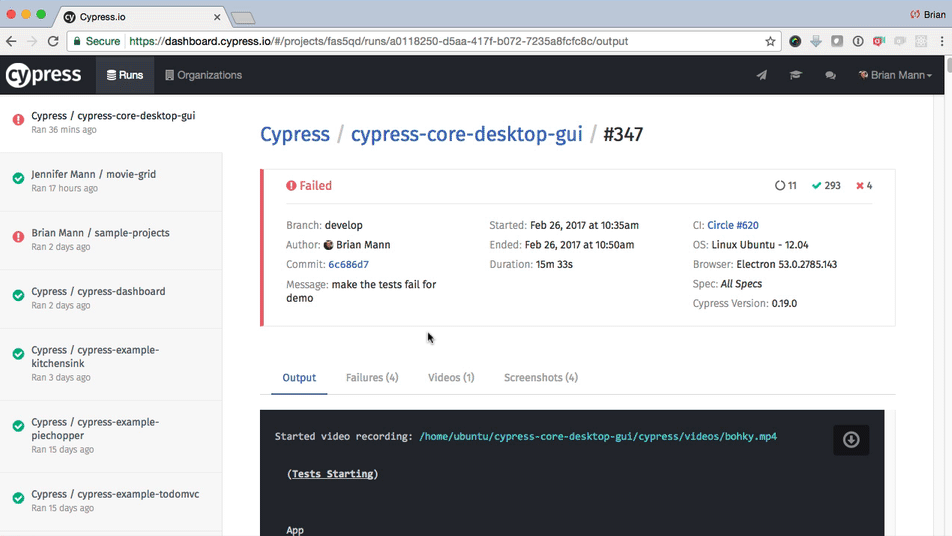 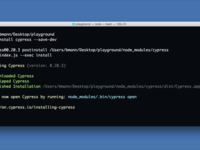 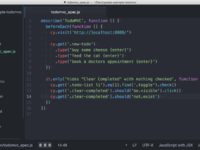 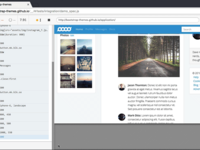 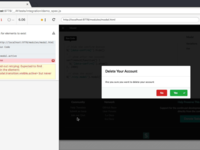 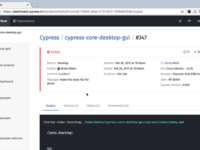 "This is a fantastic product for testing Javascript front ends. Quick & easy to become productive."

Kommentare: Cypress.io has made writing Javascript tests a pure pleasure. It even allowed me to do testing (integration and end-to-end) on software that was written only with JQuery and mostly anonymous functions that, as a consequence of this structure, was not able to be unit tested (which Cypress can also handle). This software is more full-featured than competing Javascript testing suites, and it makes the use of Selenium purely optional (and not necessary for me).

Vorteile: Second-to-none documentation. Open source with a paid model for special services (but the open-source portion is complete). Comes bundled with JQuery, mocha, and a number of other extremely useful libraries. A key point to understand in starting with this software is that all selectors (such as cy.get() ) will keep trying until a timeout is reached. You can do either a positive selector or negate the selector (test for element to not be present in the DOM). This approach is extremely powerful. The selectors themselves, in this case, act sort of like assertions in that tests fail if the selector condition times out. Each subsequent cy.xxxx() command is only executed after the previous cy.xxxx() command completes - either the selection condition is met or it times out, so it's easy to prevent undesirable asynchronous behavior. Assertions are made using Chai, and tests are framed using Mocha syntax. I love that assertions are very English-like. Cypress.io comes with client software that spins up a browser and runs the tests. After the tests complete, you can review DOM snapshots of the test, which provides a way to play the state of the tests back over time. You can write not only unit tests, but full integration and end-to-end tests. I can't say enough good about Cypress.io. I thoroughly enjoy writing tests now, and need no other testing product for the front end.

"It's the first OSS e2e testing I'm happy to use"

Kommentare: I started using it with a personal project. It's a validation library that aims to provide plugins for vanillaJS, vue, react, angular and svelte (at least for now, I guess). I want to see if I can write an easy lib for multiple tools, allowing reuse a lot, while changing the underlying technology. Cypress helps me write e2e tests only once, and run it for every plugin I write. This ensures cross-framework compatibility!

Vorteile: - UI/UX: I'm _extremely_ amazed how intuitive is the test runner. I can check the app's state before and after an action! It helps me to find the best query selector for cypress to access an element. And they help with that with a good documentation about recommendations, best/bad practices, and the hierarchy that cypress uses when deciding what it's the best query selector.
- Fast: Tests run fast. Really fast. At least comparing it with selenium and its forks.
- Reliable: One thing Selenium frustrated me the most was how unreliable was when running tests. Sometimes they passed, sometimes not, but then again passed. Instead, Cypress has _always_ failed/passed tests consistently.
- Friendly: tests are really simple to write. I don't have to write a lot of boilerplate of my own just to wait a page to render and then be able to check if I can click a button, for example.
- It's just JS!

Nachteile: - It doesn't support other browsers than Chrome. Although there's an issue: https://github.com/cypress-io/cypress/issues/310
- It doesn't have a `tab()` function that triggers the tab key. It seems they expect to add it in v4, though. I really didn't use it to tests a big app, so I'm sure there are a lot of things they need to improve. Kudos for the team! Because e2e is not easy!

Kommentare: Overall, I am very pleased. I got more results in the same time than with other automation frameworks. Although, this may vary with different software being tested.

Vorteile: I tried using other software for testing automation, but ended up frustrated that after spending time to learn how to setup basic tests, I found that the nature of our software was not allowing for locators to correctly and repeatedly locate the UI items. And then came cypress.io.
After having spent some time to grasp the basics of javascript, everything that did not work in other setups simply worked here. Building on the basic concepts it is easy to adapt to every scenario.
There is a decent amount of tutorials to get you up and running, but hard comitment is needed to get the most out of it.
Also, a good knowledge of javascript is needed.

Nachteile: Once you get to a bit advanced setups, the tutorials provided offer little help to solving problems and you have to dig deep within the comunity to find the solutions.

"A step forward for e2e, but still too many bugs for comfort"

Vorteile: The display for your e2e tests at every step is really what i always hoped for an e2e testing software

Nachteile: Is not reliable. Tests that are ran 3 times in a row, will work 1 or 2 of those times and it has nothing to do with anything you did. Debugging often gives the wrong or useless information.

Kommentare: My overall experience with Cypress was positive. I used the product both for open-source and commercial projects and got satisfying results.

Vorteile: Cypress is one of the best solutions when it comes to Javascript end-to-end testing. Writing test cases is extremely easy, record and playback features are quite powerful. It doesn't use Selenium (a legacy technology nowadays), so it's more powerful than its competitors. Finally, it's free and open source.