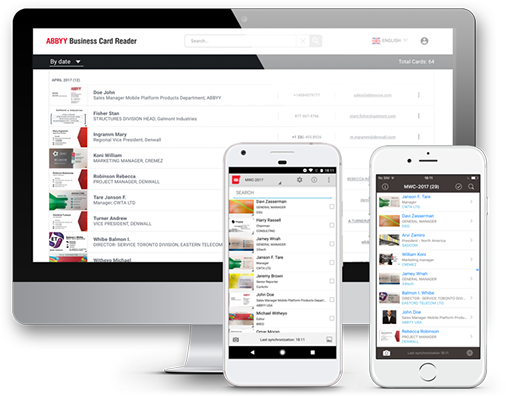 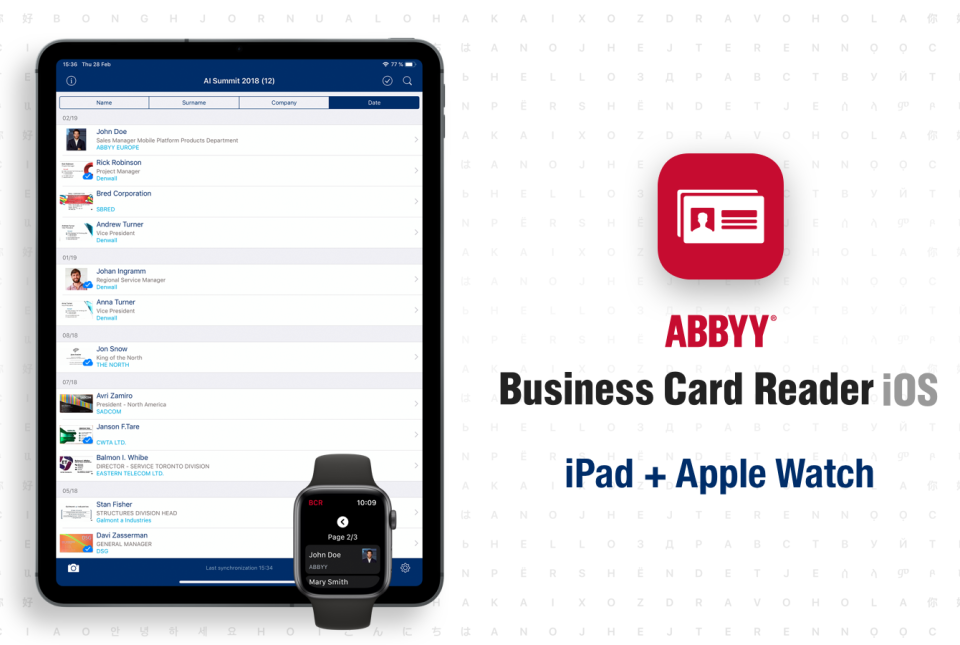 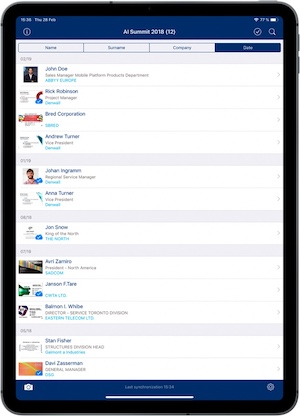 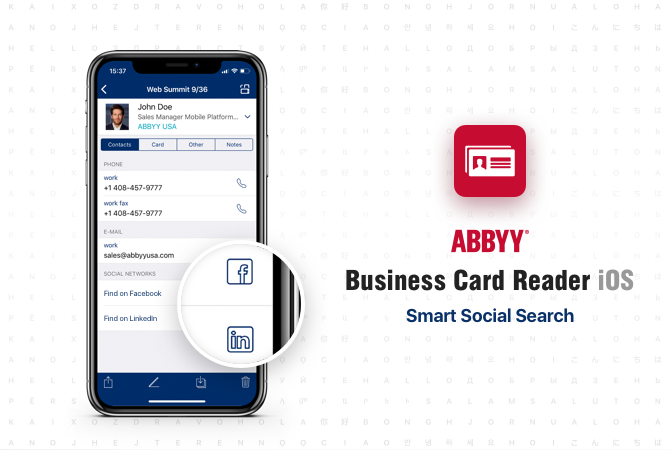 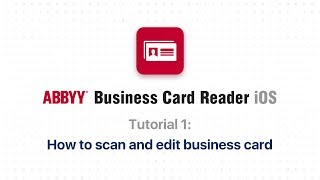 The solver for every businessman

Kommentare: Never had something that makes your business cards all in one app
I've been struggling for 3 years mostly been an import & export company specialized for all industries in China always forgetting where I got the business card from, or even losing it
With ABBYY they just made everything simple and easy to use for just one click you will get the whole collections + Group Industries organization

I personally work in past years with different apps but never had that many features as ABBYY Business card reader provides. I love the fact that you can just scan and the whole info hops directly to your phone data and access to the business card owner Facebook, WhatsApp also has the factory/company names and inside the contact details all of this in one scan. I am a multi-lingual entrepreneur sometimes I receive a business card in Chinese and it scans directly with no issue. Also, another feature is that you can organize your business card by category. You can also send an automatic professional email to the cardholder directly.

The only suggestion I have is to make a small update and make the APP compatible with the WeChat app. When I scan the business card it can suggest me to add them to my Wechat app contact. Besides that, I am a satisfied user

Excellent product with some flaws

Kommentare: Overall I really like the product and I have tried many - this is best in class. That being said, it does have some flaws - for example, its Facebook search feature, which is an incredibly good idea, is broken, and only lists a string of numbers as a result. This works fine in the app, but is incapable of being exported. I contacted support, which was slow and difficult to communicate successfully with, and was told after waiting almost a week, that all I need to do is cut and paste the numbers into a Facebook search field. First - I workaround is not working software, second - they must not have tested the solution because it did not work. Oh, and I was told, that the developers were looking into it. Plus, when I paid for the app, I was overcharged. I was told I could go through a whole process to get the few dollars back. Not a great solution to spend an hour to get a few bucks. They can keep the money and I will use the time productively instead and write about it in a review instead. All of this sounds negative, which is a shame, because overall, it is a really good and useful app. It is kind of like painting the Mona Lisa with a smear on her cheek...

Easy to use. Some great features. Decent OCR.

Limited export options. Facebook feature, which is an incredibly good idea is broken. Missing some obvious customizations that would allow it to be even more useful. The OCR, while decent, could be better. This is strange considering who makes the product.

Thank you so much for taking your time to leave a review! We sincerely want to fix the issue you faced. Please write us to mobile_support@abbyy.com. We'll do our best to help! Have a nice day, ABBYY Mobile

Love saving paper and stress of keeping up with business cards

Hi Nancy, Thank you for great feedback and for your suggestion! We'll work further to provide you with an even better experience:) Have a nice day, ABBYY Mobile

Kommentare: It allows me to quickly capture new contacts and when I need to recall the data it is there at my fingertips

It will populate my cell phone and my data base. I also like the business card reader.

Hi Beatrice, Thank you for rating our app so high! We are always trying to do our best to make sure that our clients are satisfied. Regards, ABBYY Mobile

Easy to use, very quick, and accurate , very reliable

Not integrated with Siri yet. I’d like to be able to say Hey Siri, John Smith business card and the card itself pops up

Hi Ryan, Thanks a lot for your review, it's a pleasure! We'll try to work even harder so you could get maximum benefit from our app:) Have a nice day, ABBYY Mobile