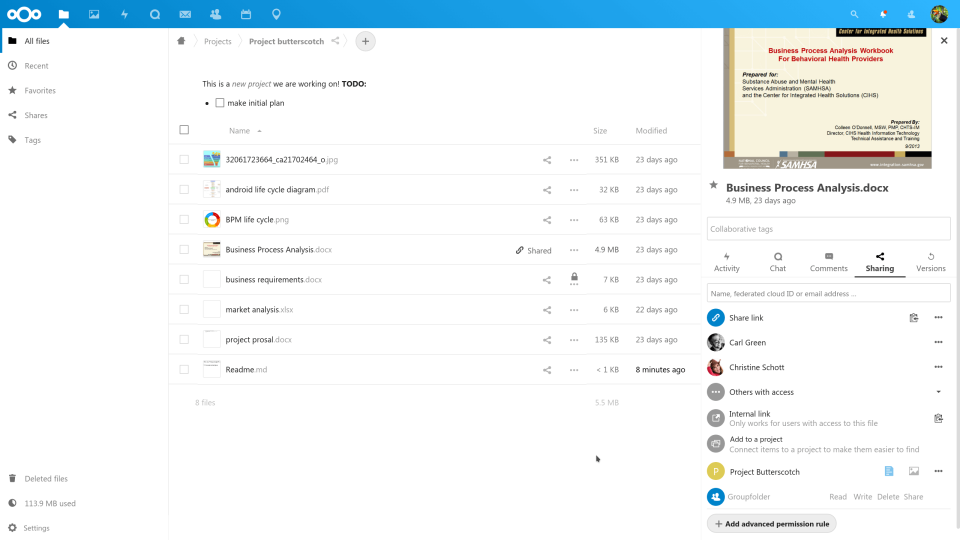 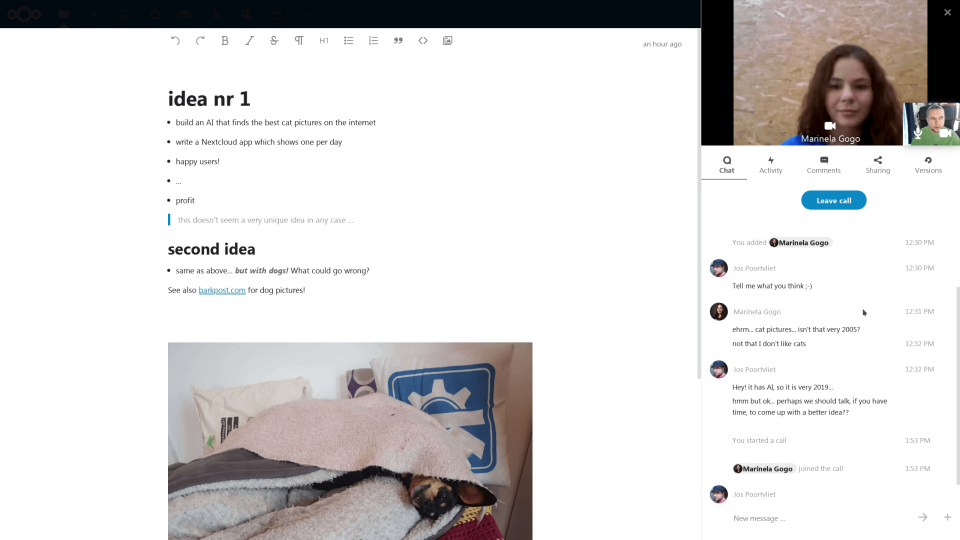 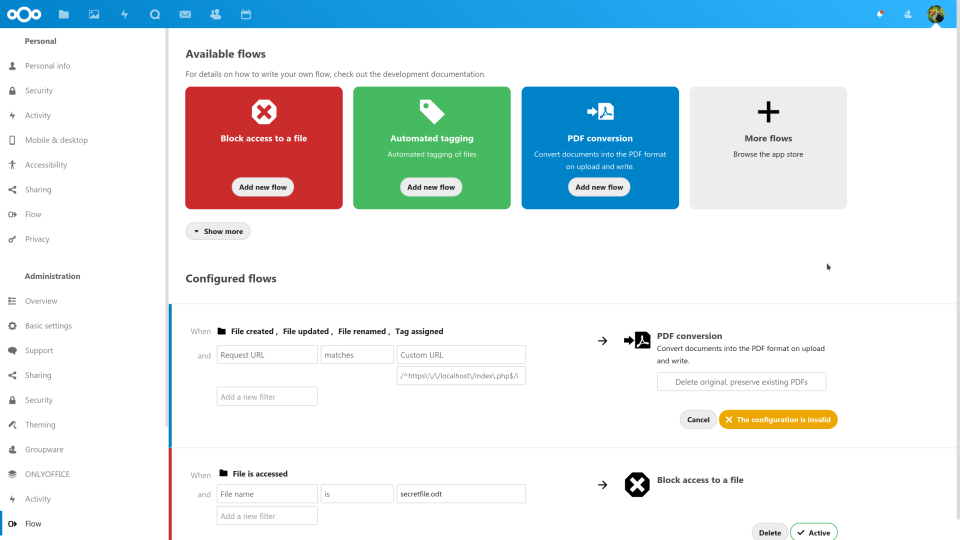 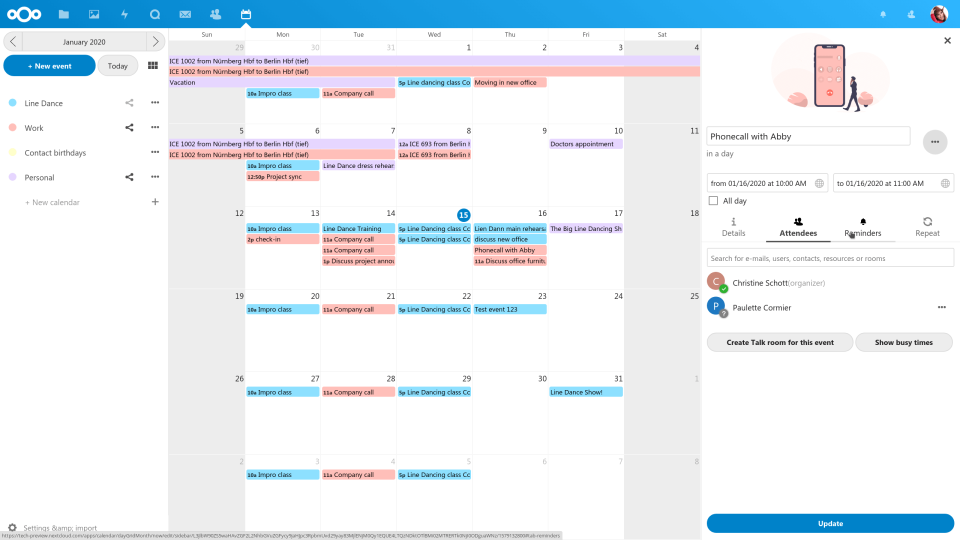 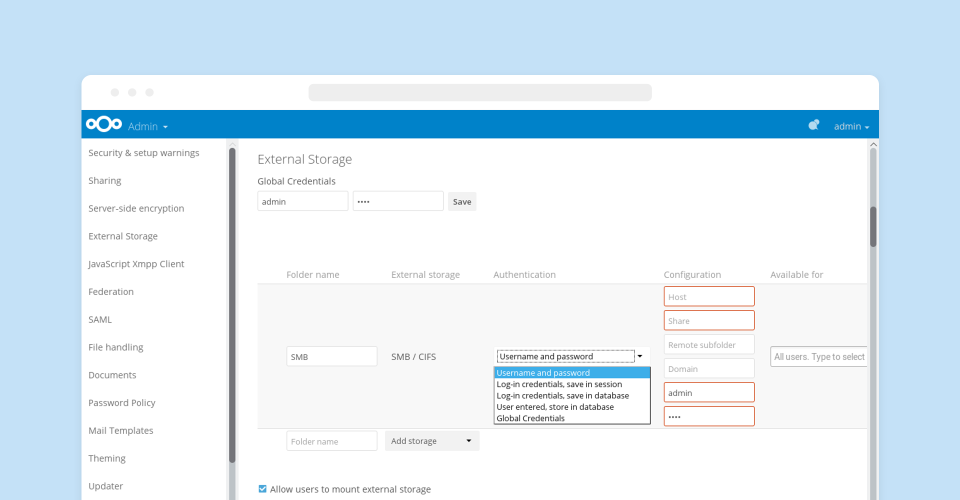 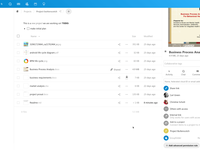 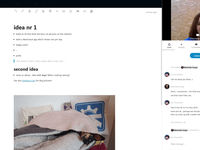 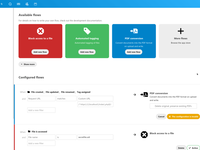 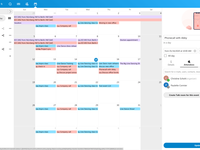 "Liberation from public clouds at last!"

Kommentare: Hands-down best cloud system I've used. Dropbox, iCloud, OneDrive, Google Drive - I've tried them all, and beyond storage capacity that's either limited or costly, they don't offer as much flexibility for managing multiple folders. And even the best of them had conflict files more often than I've seen with Nextcloud.

Vorteile: Nextcloud has opened up smoother, more flexible workflows for coordinating work between machines in my office and team members around the world. Lately we've been expanding our use of Nextcloud to include many of the popular apps available for it, like Calendar, Announcements, and the nifty kanban tool Deck.

Nachteile: Easier ways to deploy apps to specific groups would be welcome, and given Nextcloud's strong community I trust that's in the works.

"The all-in-one platform for business applications"

Vorteile: Its easy to use, stable and dependable, extremely customisable, and works across all mobile and desktop operating systems. Perhaps most importantly, through the built in app store, it serves as a platform for many other key business applications which we need, such as collaborative document editing, calendar and contact sync and share, internal knowledge base (wiki), and more.

Nachteile: It could be easier to get set up. The video conferencing features so far didn't work reliably on our installation.

"The best private cloud I know"

Kommentare: In Digipime we use Nexcloud as the basis for sharing documents with our customers. In addition, our services for customers based on Nexcloud have great success in our market for small and medium businesses.

Vorteile: Simple, fast, very configurable and with the best plugins for connection with third applications.

Nachteile: There are no cons. The product is good enough not to have any issues to consider.

Thank you so much for this great feedback! :)

"Taking back Control of our Data."

Kommentare: We were looking to get control over how we shared, stored and backed up our data. We are a small enterprise which needs every penny to make a bang, Nextcloud gives you more than that bang. Super efficient user interface and easy installation make it a perfect replacement for other commercial competitors. Extremely satisfied with Nextcloud.

Vorteile: Absolutely everything about Nextcloud is extremely well thought of and can cater to needs of small as well as large companies which need complete control over their data for all the various reasons concerning data privacy and data storage. Nextcloud gives you unparalleled control over everything that you need to do with your data. Nextcloud is a dream come true.

Nachteile: Nothing. What can be bad when you are in complete control over your own data.

Kommentare: As mentioned in the last point above:
3. UI is poorly integrated with the OS. It is usable, but it can be better. Compare scrolling in browser and scrolling in a list there. You will see the difference. 4. android upload/share is not reliable. User experience in the android app leaves much to be desired. For example on fairly modern phone and on wifi connection, the UI hangs on every screen for some time (sometimes fractions of seconds, but sometimes for multiple seconds). This is unacceptable. If I want to show my friends a funny picture that fits into conversation and can not open it very fast. It is a frustrating experience.
4.1. What is more important is that the file sync function works reliably. And that is not a case, at least not in the android app. When my wife selects some photos or videos that she wants to move to nextcloud folder and only a subset of it actually gets moved. What can I say, please check which of 100 photos were uploaded and retry those that were not uploaded. First, have fun finding them. Second, watch that it works this time, or you have to repeat. What do you think she tells me? Oh, I like how this peace of software works. Definitely not. And that's frustrating to me because I setup and maintain the nextcloud instance.

Vorteile: That it exists! And it is on the market for a while now. Free, and more importantly self-hosted, alternative to Dropbox. I know it is more than dropbox, but more on that later.

Nachteile: Initially it was a software to share files between different computers and possibly with other people. Managing files is nextcloud's core competence. And even after years using it, it is sad to see that it doesn't always work reliably! I can tell couple of examples from experiences. 1. constant conflicts. I use a diary software to keep notes and often get conflicts when doing notes. Luckily it is in plain text so I can resolve conflicts, in contrast to binary files where it is mostly not trivial at all. While keeping doing notes it is tiresome and tedious to being obligated to solve these conflicts although it is just an ongoing stream of changes. 2. Activity view is not usable. It is just frustrating to not being able to see and find the information you need. Sometimes it is just a list of files that are being ignored on top of the list. I don't care about the files that are ignored all the time. A dropdown menu can be provided to select the files I want to see. Filter the conflicts or ignored files or whatever else is there.
2.1. File(s) that are being synced right now, where are they? If it's a big iso image being synced now and if I interrupt have to start over. The main tab with folders gives me only numbers like "syncing file 5 out of 72".
2.2. In the same Activity tab so much space is wasted. You could move this date of sync to the right on the same line if it fits, and only if it doesn't fit into one line move it to the next. Ok, this box is limited to 1500 symbol