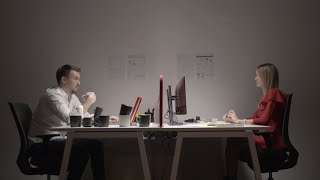 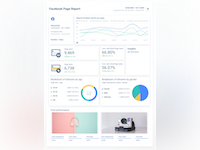 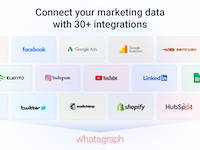 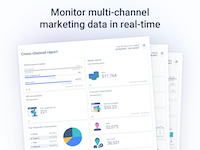 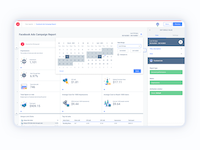 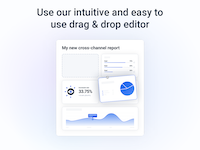 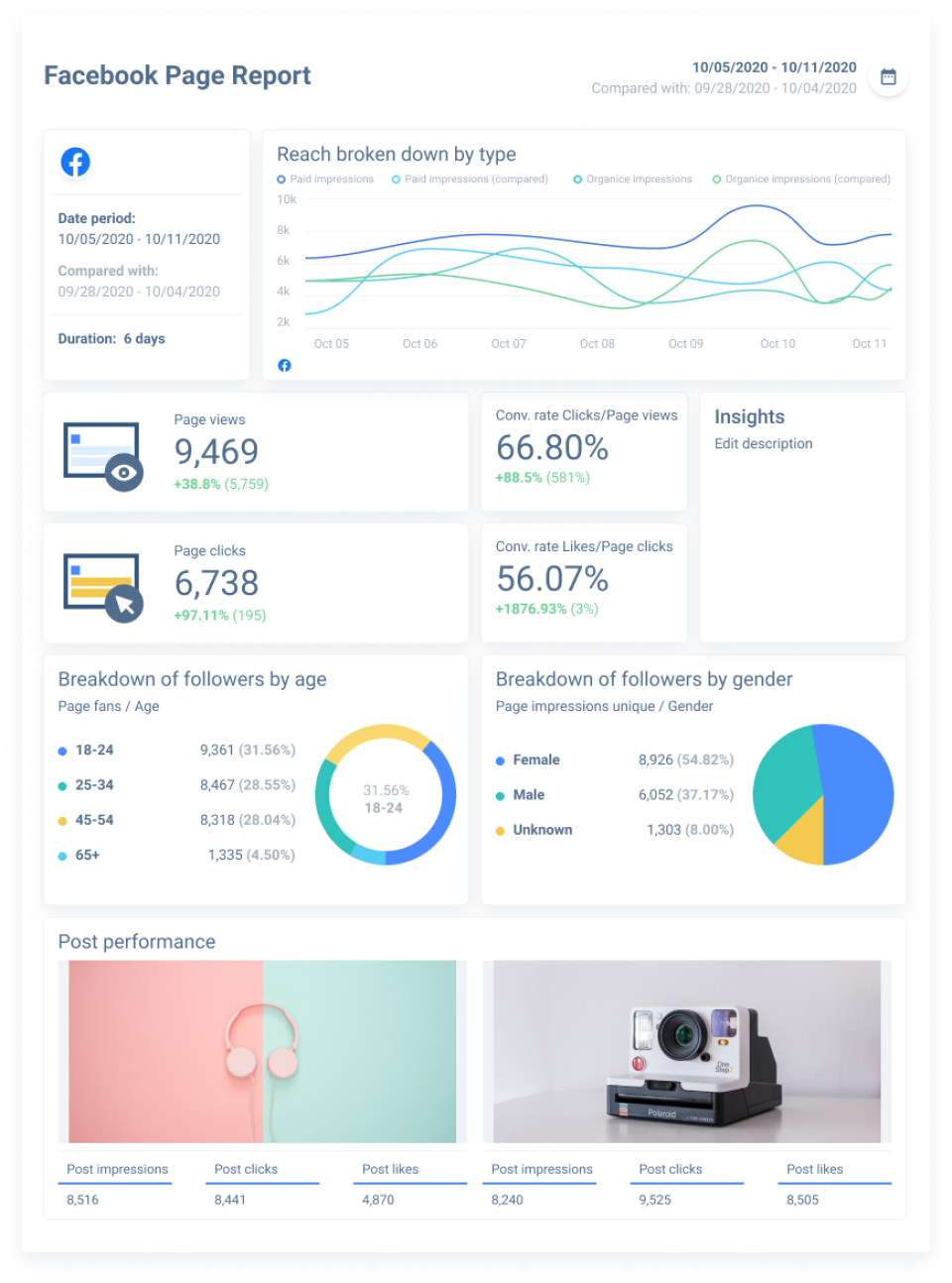 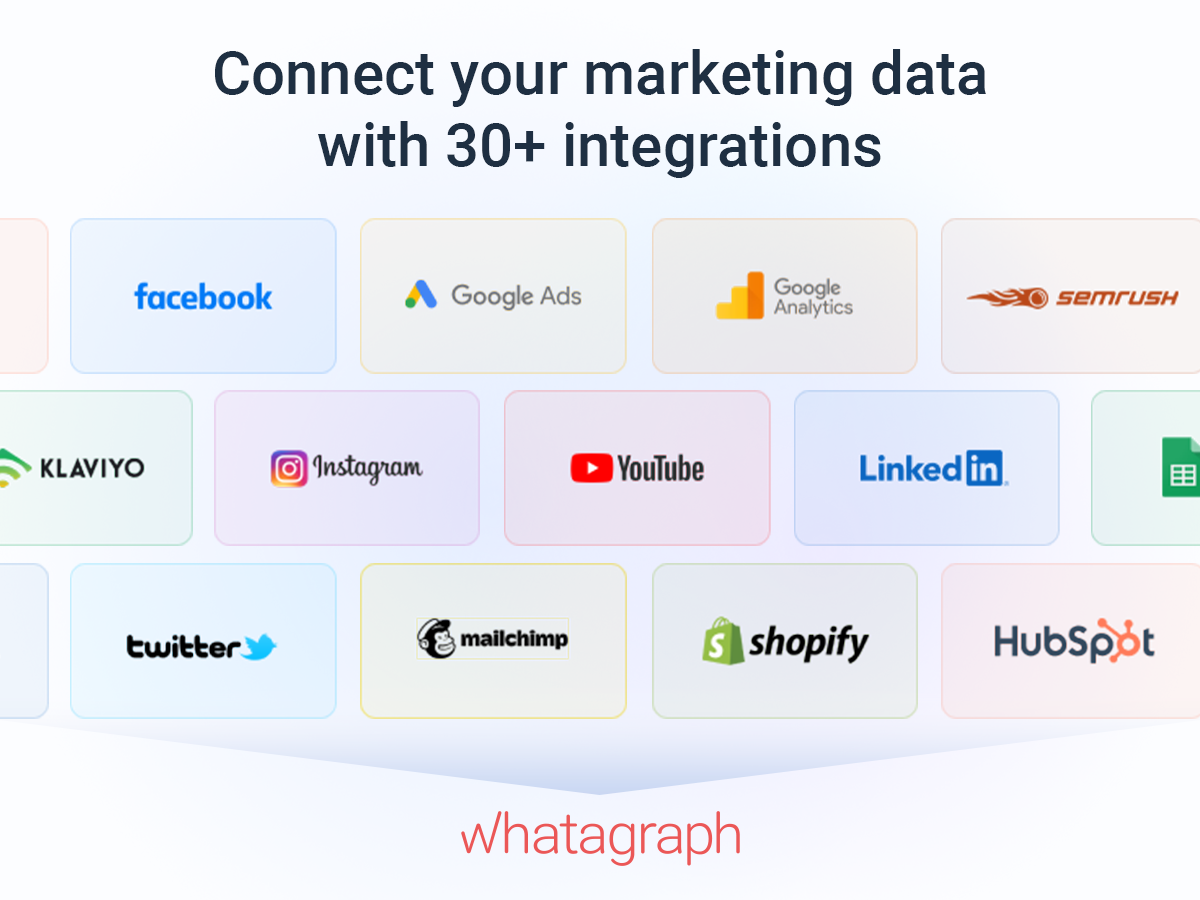 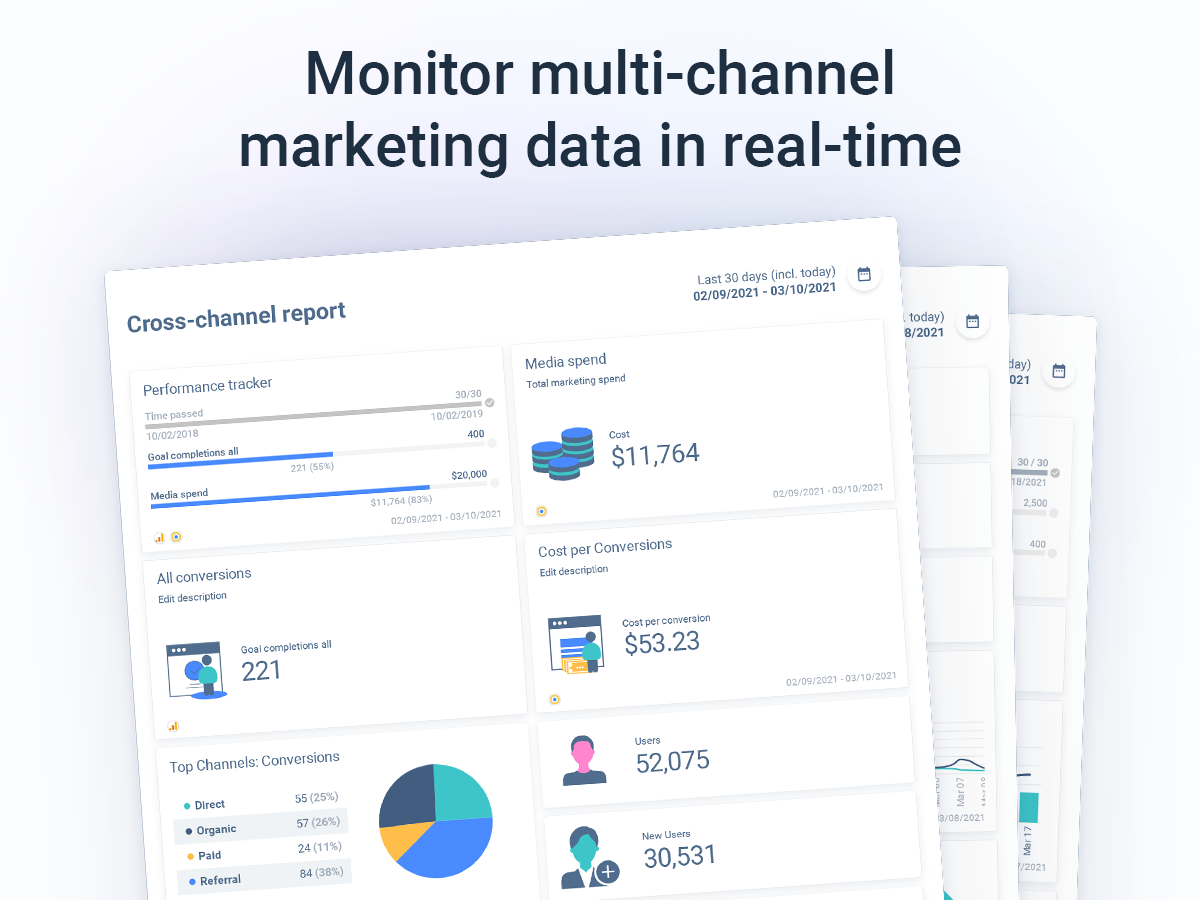 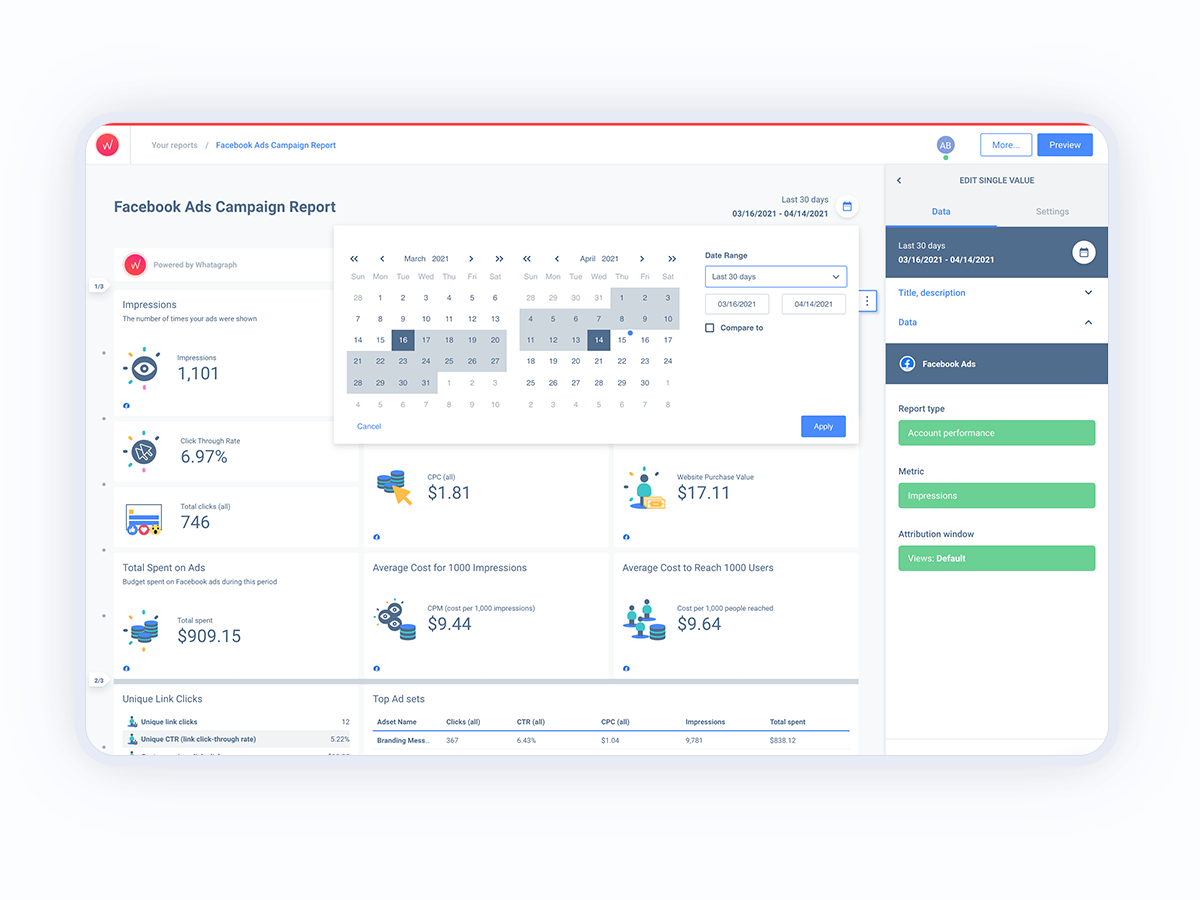 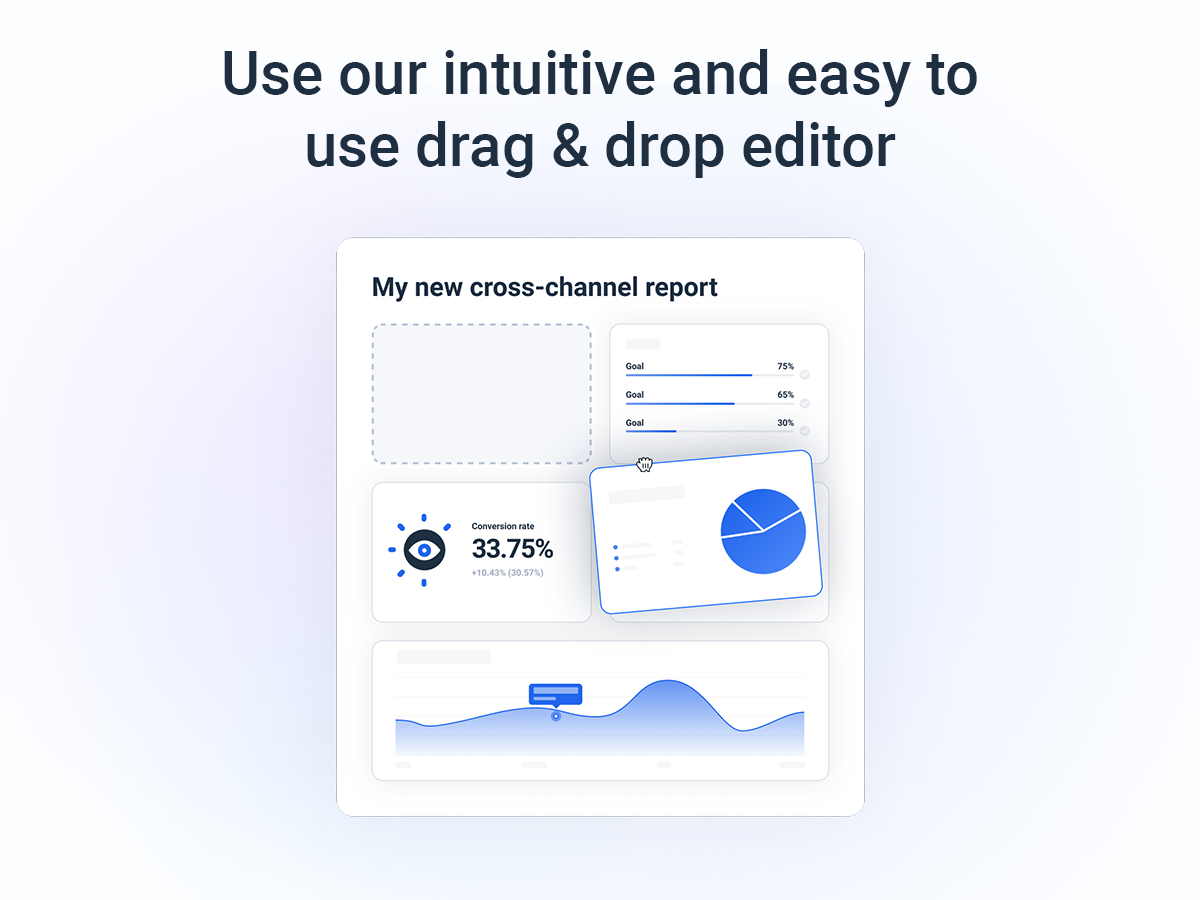 This product is amazing!

Kommentare: It saved us a lot of time while using it. Also, the graphics are amazing.

The user interface is easy to navigate . This tool has really good graphics. It saves a lot of time.

Kommentare: A very good tool for reporting my Google Analytics and social media platform metrics to clients. I made a switch from GDS and Sheets for reporting to Whatagraph, and I am saving literal hours each week on performance report creation. Our small firm actually managed to onboard 2 new clients as a result of all the time we saved on managing data and reporting. The customer service is also really helpful and easy to reach, however, I am located in Europe so I did notice that some reviewers weren't too happy with customer service hours but they were located in NA.

I like how incredibly easy it is to set up this platform for reporting. Integrating digital marketing tools is quick and you can start reporting in just a few minutes after setting up an account. I noticed they also recently launched a new feature called Smart Builder, which basically builds the entire report for you, based on the desired platforms and reporting specifications. Amazing stuff really.

Some graphs are interactive and allow you to select the line graphs you wish to display at the same time, however, I only discovered this by accident. This feature should've been communicated more clearly.

Kommentare: Not done. There's zero chance I would trust this with clients. During the sales process, I was told we could white label the product on our own URL. After seeing there was no obvious way to make that happen in the app, I reached out to support and was told that feature wasn't available. I bristled at that because that was a big part of the deal for us. Eventually, they said they could make it happen. We never set it up though because there were simply too many other red flags. I think the support people were nice and good intentioned. I just think the product is not stable and needs some thought put into it. I have screenshots, videos, and chat transcripts that I'm happy to share with anyone who wants to know more about my experience. I tried to get a refund, but they let me know that they don't that. They did offer me a free month, but what use is a free month of something that doesn't solve your problem. So, they took me for $800. The software costs $3,200/year, at least that was the "deal" I got. I'm hoping anyone considering this product will read this and take my experience into consideration. Again, I think it's a great idea. Execution is very lacking.

I liked the idea. Who wouldn't want one tool that combines all your marketing platforms and allows you produce beautiful reporting. That may be the brand promise. Unfortunately, it just doesn't deliver... unless your reporting needs amount to the stock reports you could get from any native platform.

Bug, bugs, bugs. On day one, the date selector did not work. I have no idea how many customers they had, but I'm the one who brought it to their attention. They didn't know their date selector didn't work. Support had to provide a "work around" whereby I would need to select not the dates I wanted in order to get the dates I wanted. Then, that took a few days to fix. I shouldn't need to explain that a very basic feature. But, that was just the beginning. Over about a week of trying to use this software, I was hit with what I would describe as more bugs along with many things that were either completely counterintuitive from a UI perspective or just misrepresentations of functionality from the sales process. For instance, they claim to integrate with Google Sheets. They even have documentation on how to do it. All I needed to do was simply display a simple Google Sheet. Not possible. They had to get a developer involved and more or less trick the system into just displaying a simple sheet. No calculations. Nothing fancy. Just values in cells that could not be displayed without a team of people working on it. Hopefully, they're going to either change the product, fix the documentation, or just remove Google Sheets as one of their supported integrations. Often times, while using the product, I would "save" something only to have it not save. I saved a report to test, generated a link, and the link showed an old version of the report prior to the save.

Kommentare: I have still not yet mastered it but it seems that whatagraph is a very usefull tool

Warum Whatagraph gewählt wurde: That we can use more accounts in whatagraph for the little bit cheaper price.

Gründe für den Wechsel zu Whatagraph: That we can use more accounts in whatagraph for the little bit cheaper price.

Thanks for the feedback, Manvydas! Let us know what areas you're struggling with and we'd happily help you master Whatagraph. As for the link clicks, this metric is available for Facebook Ads, whereas organic Facebook posts have post clicks.

Set and forget (Whatagraph then does the rest)

Kommentare: I was looking for an easier way to receive regular reports in a consistent format from the various platforms I use socially. Whatagraph does that perfectly. I now get regular reports that are consistently branded and laid out from the several social networks I use.

The ease of receiving an email regularly to let me know the latest report is ready for viewing is priceless. The quality of the reports themselves in the platform is excellent as well.

The number of connections is limited, but honestly suits my personal needs.

Gründe für den Wechsel zu Whatagraph: The setup was easier, and so far the platform has had far fewer data disconnections than I'd experienced in free versions of other platforms I'd tried previously.

Thanks so much! So glad to hear Whatagraph helps you create better reports in a fraction of the time.