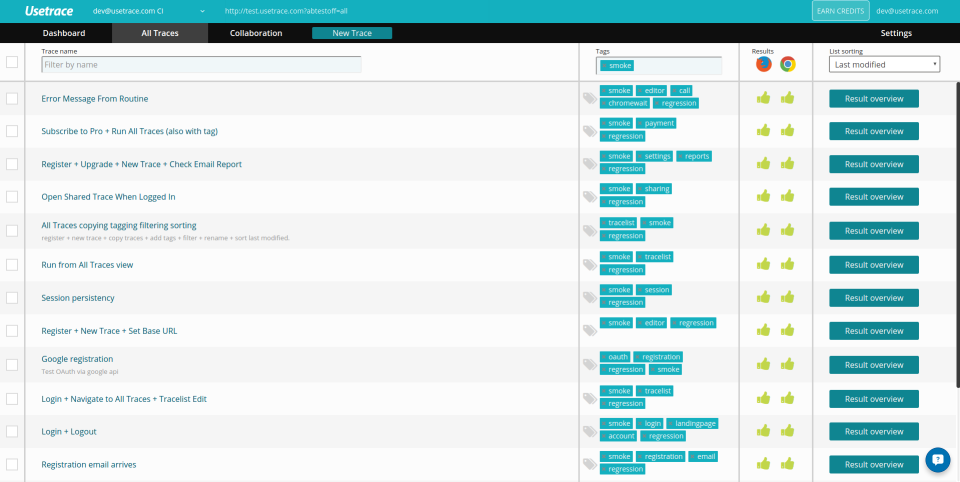 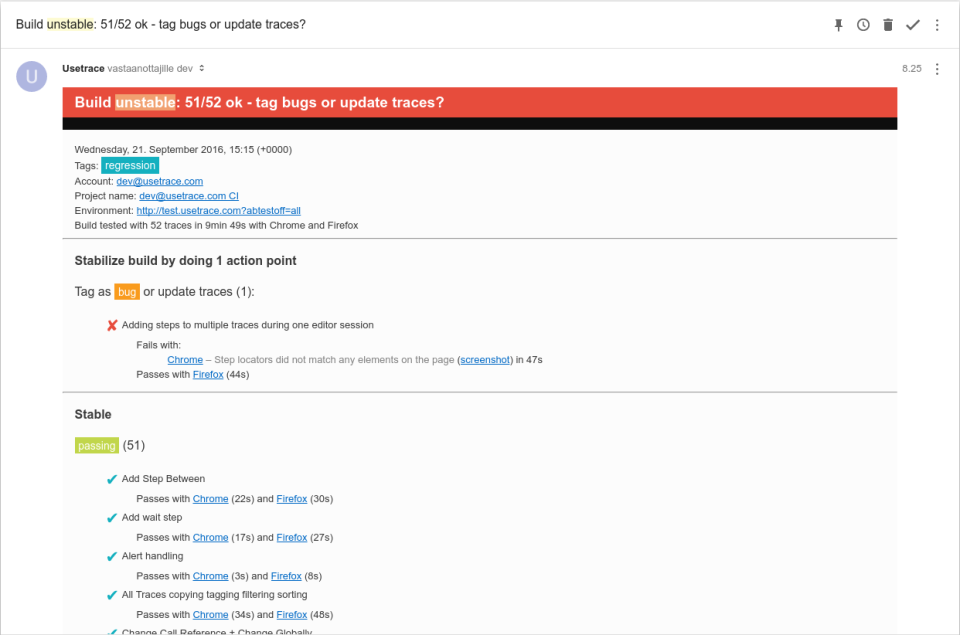 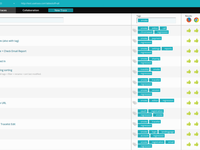 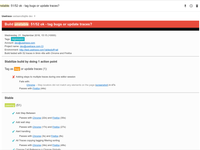 Kommentare: We began using Usetrace a couple of months ago and already have seen a dramatic decrease in some of our regression testing time. Building traces is very easy and intuitive, cutting down on startup time. They have thought of just about everything and continue to add improvements. Customer support is incredibly responsive for the times that you need a little help. We have automated some complex purchase testing that took 3 people a full day to manually complete. With the press of a button now one person can complete the same number of tests within minutes!

Vorteile: It is very easy for non-technical people to create very robust tests.

Nachteile: They need to add to their documentation.

"UseTrace: A New Way to Test"

Kommentare: The application is still not fully developed, but they've got exactly the right idea and what does work is well done. They are a graphical interface for automating regression testing. They are built on Selenium, but they are opening the world of regression testing to relatively nontechnical users. They also have a responsive technical support, and they are really committed to making a great product.

Vorteile: The graphical summary of the trace steps. You can literally see your steps so far! Also, it's greate that they're entirely in the cloud, so that you can virtually run every test and any cookies, etc. are not going to skew results. That also allows you to choose from 5 browsers. And you can hone the steps as needed, for instance by adding or deleting locators. You can coordinate with team members, sending them urls for each site.

Nachteile: The biggest two problems are: (1) you can't export to Selenium files--it's currently a closed system; (2) a lot of planned capabilities are still being developed. For instance, there are certain fairly basic capabilities that I find still would take a bit of javascript coding. Not that you have to, but at times it might be handy.

Thanks for the in-depth review!

There's an export to get all of your test suite data out in JSON http://docs.usetrace.com/api/#export

"Frees up your devs with quick, automated testing"

Kommentare: A small team of developers I work with on a project that focuses heavily on UX has begun using Usetrace for its quick and easy testing workflow. They can finally be free of manually building tests and having to babysit the entire process.

Vorteile: Building traces is easy and anyone can create robust load balancing, performance and regression tests without having to write a single line of code. Traces also run regularly—including whenever the code is updated so you have the confidence that the latest version is being tested at all times. Editing and maintaining traces is also easy and intuitive. Usetrace has a visual dashboard so you can check in on how your site is doing and you get an email or SMS alert if something fails. So far, the team really appreciates having the most tedious and repetitive part of their job taken care of so they can focus on better and more creative tasks. Plus, there's a free version which is always appreciated!

Nachteile: It's a relatively new software so don't expect a plethora of in-depth features. It has what it needs to get the job done and there seems to be lots of exciting development in the works as they're continually adding improvements.

"Software which reduces you load in testing field"

Vorteile: It is a cloud based software which doesn't require any coding. It continuously monitors and tests your developed app to confirm if it is working fine.
It has a GUI feature so its dashboard continuously shows the status of your work.
It can do scripting for you also.
It send SMS alerts right away when your website is failing.

Nachteile: Cannot think of any cons yet as we have not faced any. Its price can be a bit low.

Thank you for the review!

Kommentare: Just created my first traces for our mobile UX - worked very well out of the box! Within a few minutes we had built a trace for our app's on-boarding flow. Our next step is to integrate with our CI Server. Feels really refreshing that it was so easy to move this from manual QA to an automated process. Also, found the documentation around tunneling / ngrok very easy to follow.

Vorteile: Ease of creating traces and the flexibility of editing / maintaining traces.

Nachteile: We are building an app with cordova / ionic. While mobile screen sizes are supported, it would be nice to be able to test the native integrations (ie, native keyboards) that may effect the user experience.