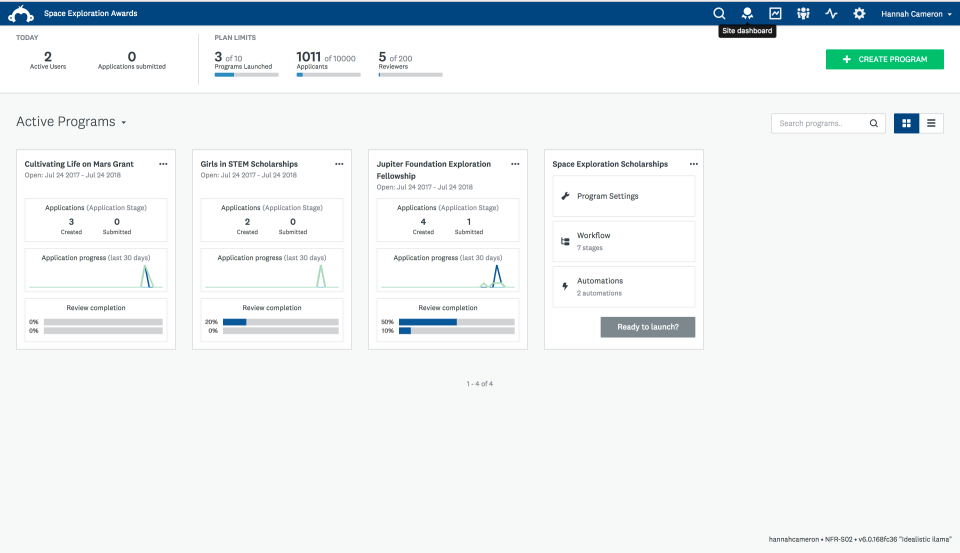 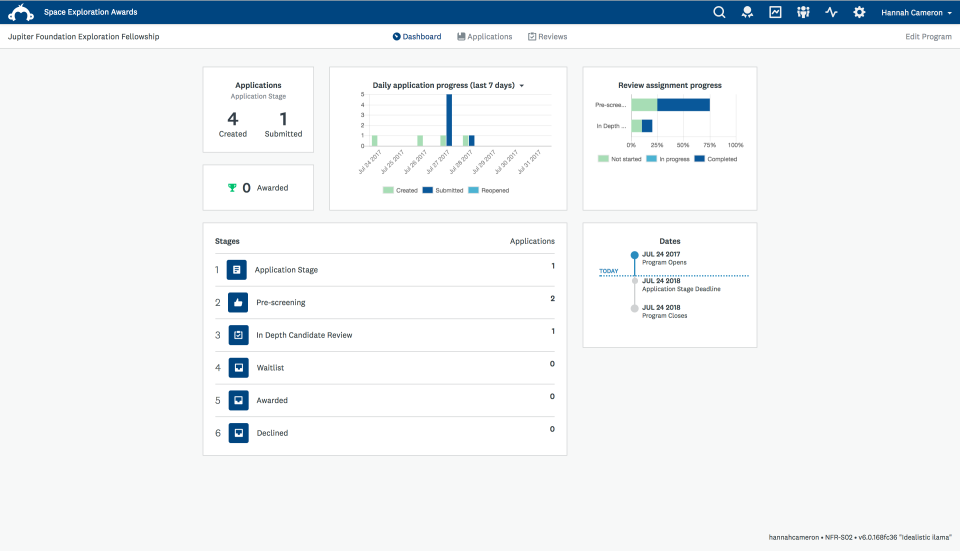 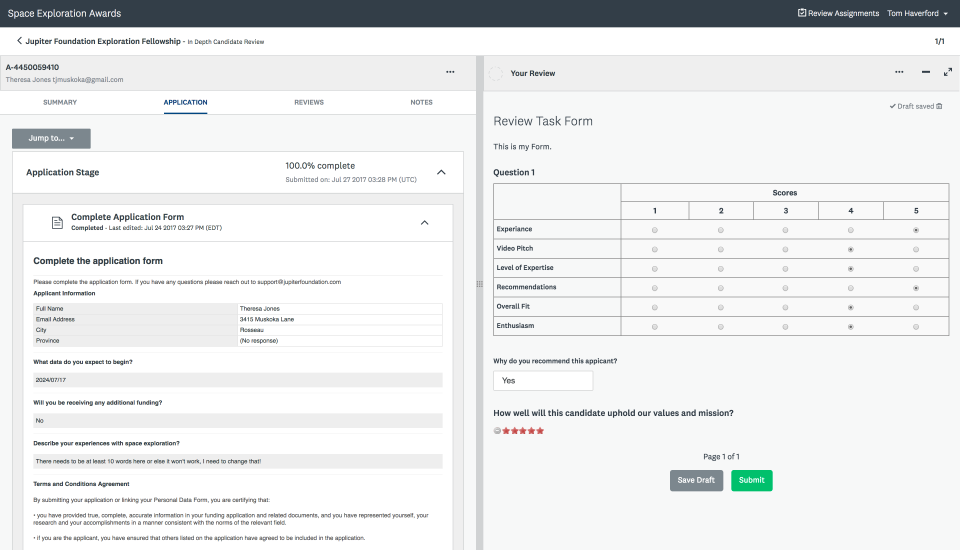 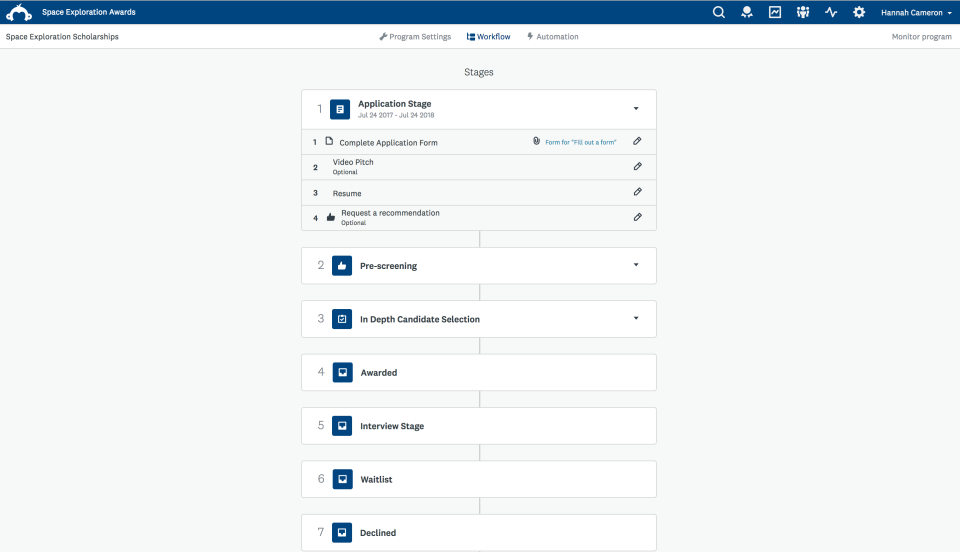 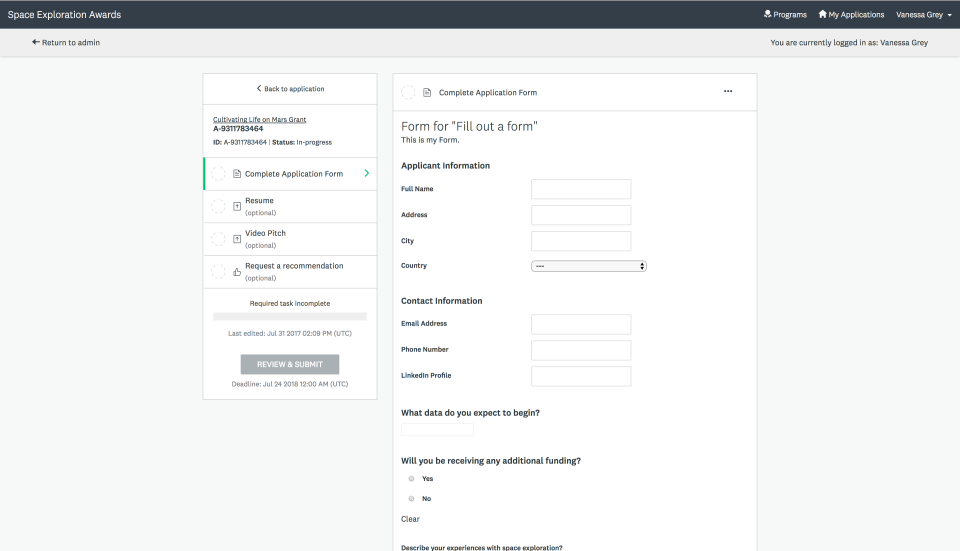 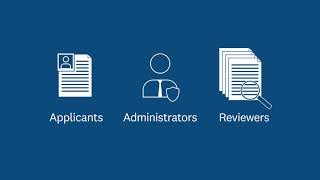 3,7 (7)
Powerful fundraising and supporter management tools which help you work more efficiently and bring in more money for your mission.
Produktdetails Vergleich anzeigen

Kommentare: We were able to streamline both our application process as well as the 2 year grant cycle process so it is all in one platform from application through review and then any subsequent reporting requirements of our subgrantees.

I liked how the implementation specialist was willing to answer all of our questions and work with us on our incredibly complex process to make sure our end product met all of our needs.

There are a few features we wished it had, but we understand our application process is far more complex than most organizations.

Hi Michael, Thank you for taking the time to provide this review. It¿s great to hear that your experience with the implementation specialist was positive and that they were able to work with you to design a solution that fit your process. We would love to learn more about product features that would benefit your organization. If you¿d be willing to connect with us about this, please reach out to our customer success team at smapplycsm@surveymonkey.com. Thank you and and we look forward to continuing our partnership.

The Best Software You Didn't Know You Needed

Kommentare: My overall experience has been exceptional. I cannot imagine doing the work I do without having SurveyMonkey Apply. It has become a staple of my work life and also of my applicants. They are now quite comfortable with it and most application periods have very few issues; certainly none we can't resolve. I hope to keep using it for many years.

Above all, I love the customer service. All issues are resolved quickly. In addition, the software is easy to use for all users: applicants, reviewers, administrators. COVID-19 restrictions forced everything online. Applications and reviews were always online only, but now we have the contract with digital signatures, approvals and signatures with Finance Dept, Contract acceptance, and the grant report all online as well. It has been a life saver.

If an applicant has used the software in previous years for any of my programs, all important information should auto-fill on the new application. (Name, Org, Address, Phone, Email, EIN, etc.). If a program is built in the SANDBOX, once I am finished I should be able to transfer it to the live site, instead of having to rebuild it. There should be a way to override the need to have a verified email.

A nice product with premium version. Totally worth it

Kommentare: It was great and smooth with intuitive UI

A little too much to invest in the start but totally worth it. I havent had any bad experience yet.

There's really nothing we liked about SMA because we never got as far as being able to use the software for our grants program. During the implementation process, it became clear that there are several significant flaws in the structure of SMA. As an example, SMA/FluidReview was developed for the Canadian market. As such, the organization information form (which cannot be changed) asks for CITY and PROVINCE. There are no fields for the US market such as STATE and ZIP CODE. Yes, you can add custom fields for STATE and ZIP CODE; however, these fields will appear at the end of the form away from the rest of the address information. And adding custom fields does not remove the PROVINCE field. The implementation person we worked with suggested that we ask for a US-style address on our grant application form, thus duplicating data entry. Using work-around solutions (kludges) was the order of the day. As another example, formatting for the budget form that was created for us was chaotic and confusing. Some number fields had one decimal place, others none (and not the two decimal places we were expecting). Some fields had a US dollar symbol; others did not. Again, we were told that SMA/FluidReview was developed with French formatting conventions in mind. Early on we did not see any way SMA would produce an elegant, easy to navigate solution designed for use in the US. It was at this point that we encountered the aforementioned refund policy.

The implementation process did not go smoothly for us. We were asked questions about our current grants program, which is rather simple: we use one web form hosted by Formstack. The implementation person intended to simply replicate our current grants program. This made no sense to me. We were never given the opportunity to understand what features SMA could bring to our grants process. I'm not sure how this type of implementation process would work for a foundation that is just getting started or is using an informal paper-based process. These implementation questions would be overwhelming. The biggest problem with SMA (and other similar grants software packages) is the amount of time and training expected of an administrator. These grants software packages expect that there will be one person within a foundation whose responsibility it is to administer the software. During the implementation process, it became very clear that SMA expects that administrators would devote significant time to not only training but also administrative duties. Sadly, there is no structured training program, no technical manual. So, training would be catch-as-catch can (a video here, an article there). Without someone on the foundation payroll who has a high degree of technology knowledge, SMA would be a very tough go for small foundations with few to no staff. Before you commit to SMA/FluidReview, make sure you have an administrator with a high degree of technological knowledge (and patience).

Thank you for taking the time to provide this review. We would like to apologize that your experience has not met your expectations. We are always looking to improve and your feedback is critical to that. We would like the opportunity to address the concerns you¿ve raised as there may be a misunderstanding on the some functionality. For example, organizational profile is country agnostic and can be configured to align with the United States, Canada and other countries. We have users from around the world, and they can submit their address in any format. We will reach out to you directly to discuss further. We aim to ensure that all of our administrators feel supported and trained with the solution. We understand that learning a new software can be challenging and have built a comprehensive database of training videos and articles for our administrators. We also offer one on one training if you prefer this option. Thank you again and we look forward to speaking with you.

An easy to set up process for managing users through a process, but changes are difficult

Kommentare: Solved a business problem and got us where we need to be. Long term challenges are still being worked on.

Easy to set up a full solution for an application submission and review process. Initial setup with SurveyMonkey was quick and effective. Getting a process in front of our users at a very good value price was perfect for our needs.

We've had problems with support not responding in a timely manner. Changes that we've needed to make have broken functionality in a few places. Making changes is a tricky process and should be approached with caution. 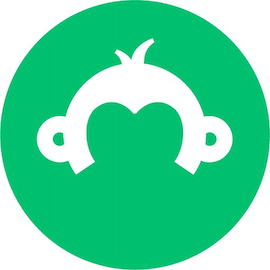