Designed for independent agents, brokers and businesses of all sizes, it is a cloud-based insurance management solution to manage customer base, risks, regulatory transactions and more. 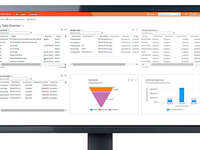 Kommentare: Everything we do with our customers is documented and we are able to set reminders for ourselves to follow up on anything and other users can see what we are doing/ have done

Vorteile: The ability to open more than one tabs and search other customers while not losing the customer I am on.

Nachteile: I don't like not being able to text out of it, whenever we do any other activity it documents it but for texting we have to use another carrier

Kommentare: This product is more expensive than competitors, but at least I know it will get the job done. It doesn't break, it gives accurate data, and the customer support is amazing.

Vorteile: I love that this software will do exactly what I want it to do. Most importantly running reports. If I run a report I get exactly the results I want, there's no guessing the output data, and when I run the report again the data is the same.

Nachteile: No One likes accord forms. I wish this product was more integrated with Accord forms, where I could search for what I wanted and it was prefilled accordingly.

Kommentare: I am able to complete my day-to-day activities and, for what features are there, they work enough to complete my job. This may just be the "Hyundai" of databases for insurance while Applied EPIC is the "Ferrari". Customer service is slow also.

Vorteile: I do like the the fact that the system provides tools needed to be able to get my job completed. I have used this program for several years but the program remains in second place, in my "book".

The Little Engine That Never Could

Kommentare: The engine was originally developed by PMSC, Inc. in SC which sold to MYND, which sold to CSC, Inc. It is the same engine that Applied's EPIC runs. I was on the original development team that in 1989-92 (to usher in desktop applications, with pre-release DB2 code developed the database interface. Its original design was for small back-office insurance companies (claims, reinsurance, bureau reporting and marketing.) It was a bust except with marketing staff that came from agency backgrounds. This was "pre-internet", so it was broken up and sold, and resold for more than the sum of its parts. The amount of space required to properly manage this type of system is disproportionate to its functionality. The cost that Vertafore continues to charge users is absurd. Long-term users feel they are held hostage and in most cases are. Migration to any other system would create a loss of attached data. Recommendation to current users-- keep a duplicate, separate, secure local server with folders for attachments, policies, etc. Reverse migrate for at least two year's before moving on. Note, it "ain't soup yet." There are some modern systems, using block chain on the horizon, but they are still 3-4 years from reliable release. For young agencies, off-the-shelf products will save you thousands and achieve the same. You'll have better accounting, better forms interface, better audit trail, better activity tracking with products everyone knows how to use.

Nachteile: The simplest of tasks require many keystrokes. Organization of attachments is impossible. Still, after all these years, users do not have a proposal function that works. Data retrieval and throw outs are frequent as Vertafore attempts to use mirror servers to manage data, forgetting that indices and data must remain together for all related users.

Kommentare: Overall, the platform is the perfect way to standardize manuals and make information easy to find, read, and manage.

Vorteile: I've used Vertafore software as a platform for company manuals at several different companies. The most helpful features are the saved links that can be renamed and organized, as well as the quick links offered on the home page.

Nachteile: Just because of the volume of data being searched, sometimes I have trouble with the search function, if I am starting from scratch. I can usually find what I need eventually, but it sometimes takes longer than I like.